The past week has been full of new “firsts”.  It was our first daylight savings time as parents, as their birthday was not long after the last one.  Reagan is now jumping in the jumper after six weeks of using it as only a place to stand, play with toys, or holler that she wants out.  I think my timid girl is getting a little braver. 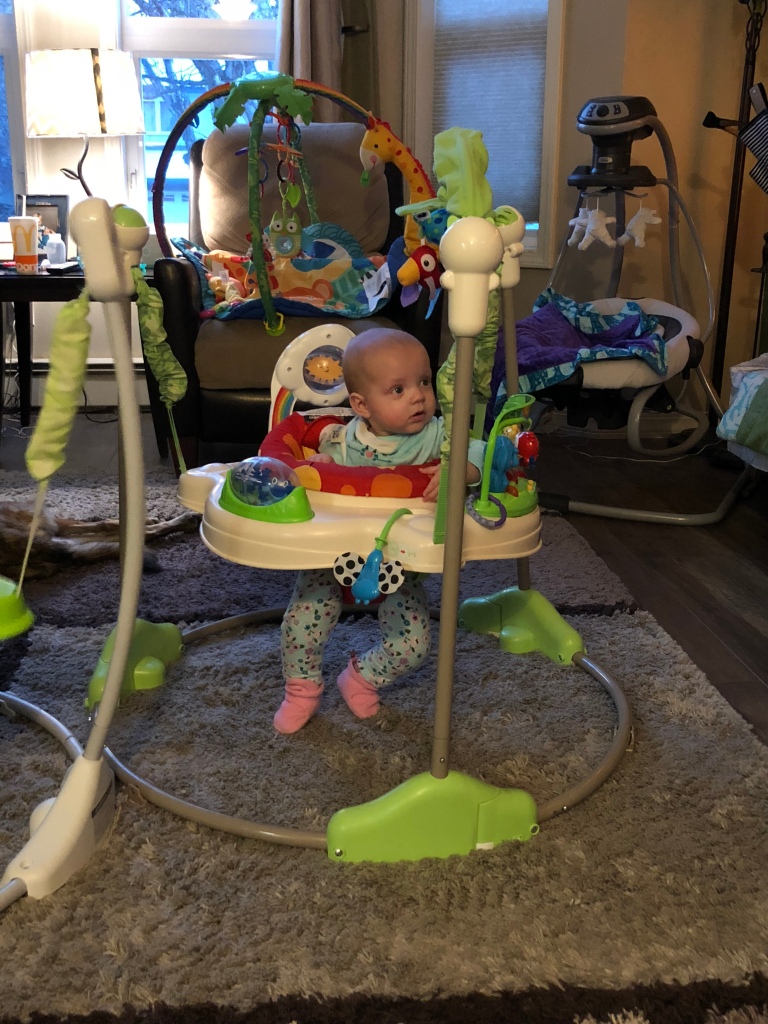 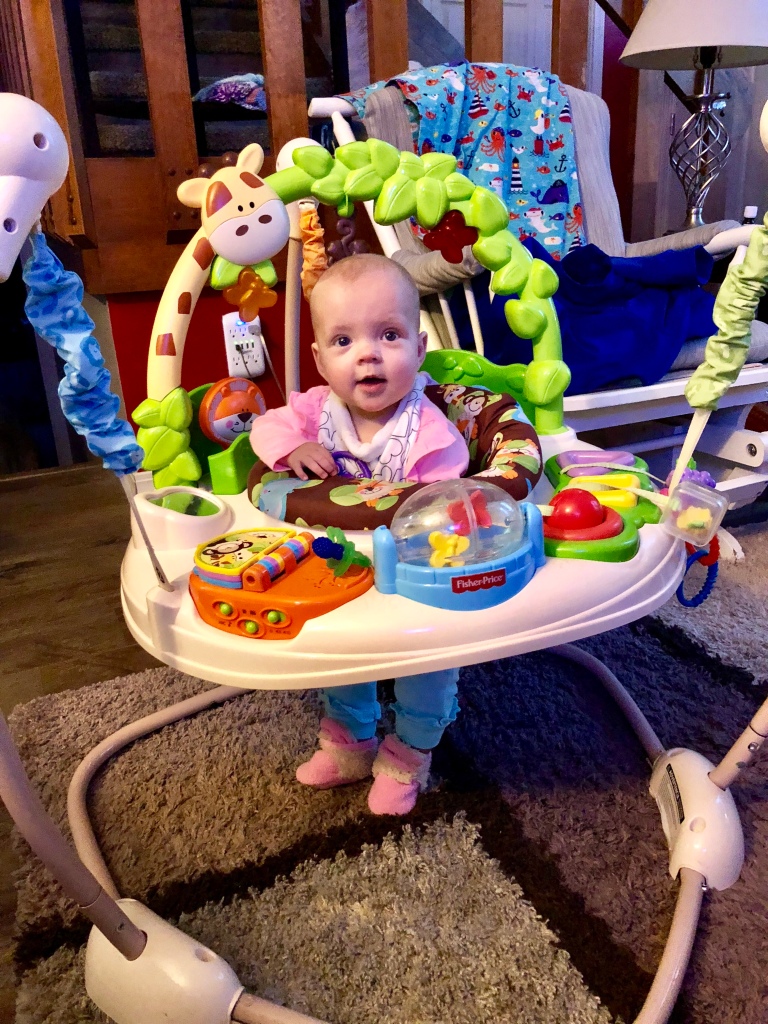 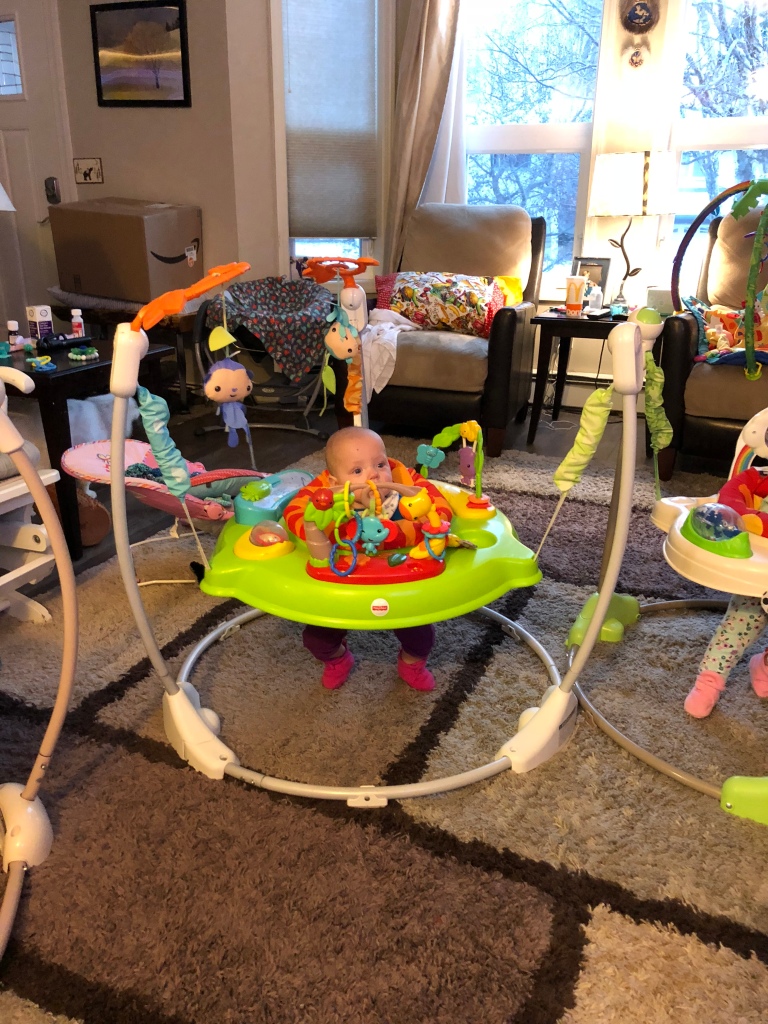 She is so very cute getting comfortable in it.  I could absolutely sit and watch the three of them jump all day, if they’d let me.  We have moments where they remain entertained for 30+ minutes in them, as long as Craig or I are in view or close by. 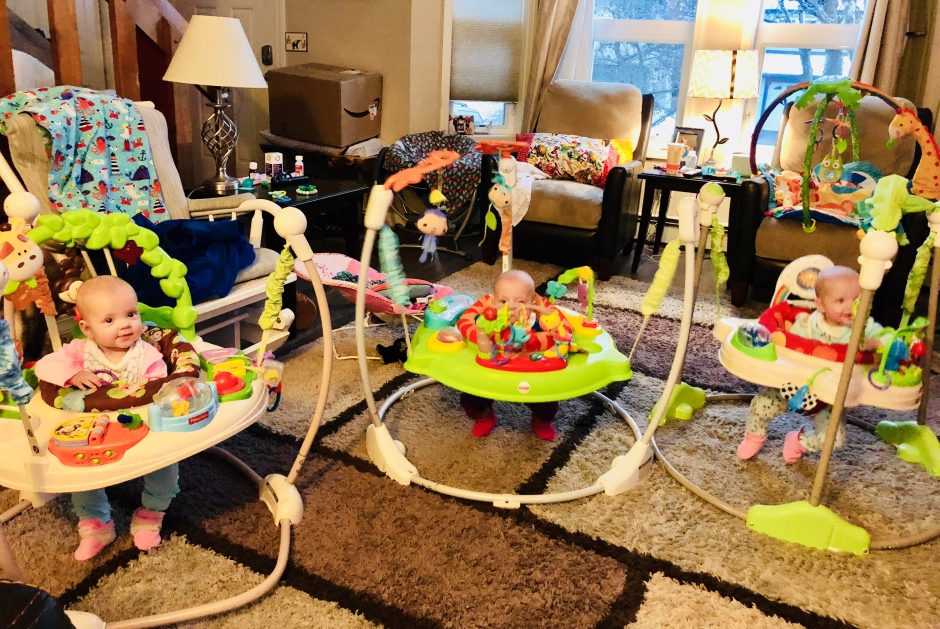 To add onto the little milestones, Harper rolled for the first time this week at Double Cuddles (mom group)!  She sneak attacked me and I wasn’t quite ready for it; she’s been rolling from her back onto her side for a while now, especially when trying to see something beside or behind her, but never fully commits to her stomach or from back to front.  She looked mildly shocked afterwards. 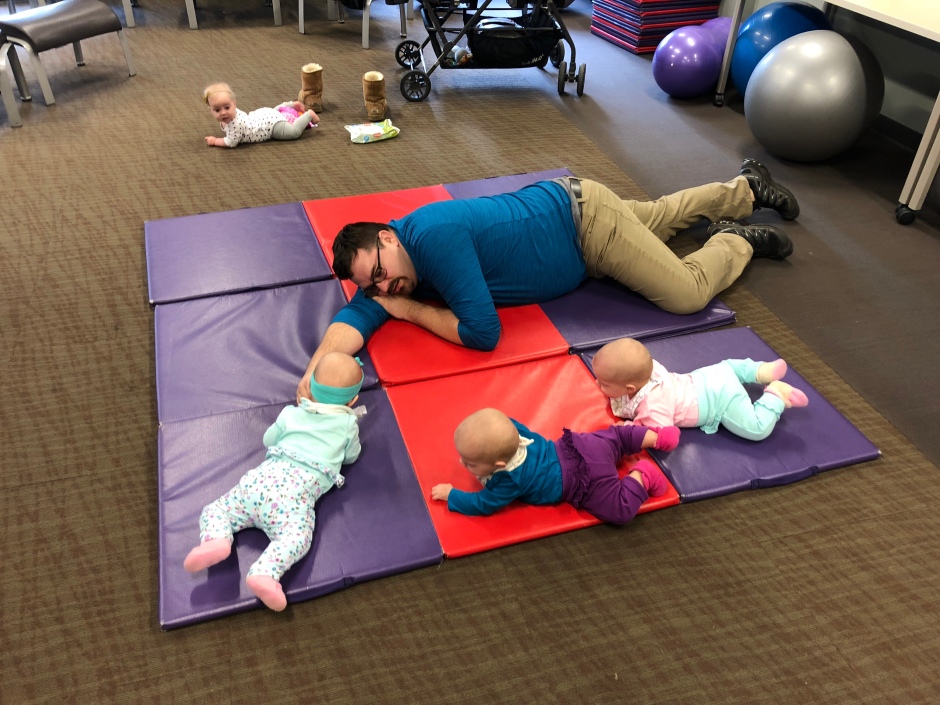 A cold has hit the Douglas household… making it 7.5 months before one invaded the house is pretty good if you ask me.  I somehow managed to keep my July cold from the girls, with extensive hand washing and not breathing their general direction, but this one originated with Reagan and ended up catching all three- not sure from where. Nothing like starting out the first week of winter with a cold x3.

The first two nights were brutal. The first night we awoke to a massive scream fest from Harper and Emerie about ten minutes after Craig and I went to bed. Apparently being gunky and congested is reason enough to not sleep in their cribs (or flat on their backs). Thank goodness we still have the rock and plays, as they at least allowed everyone some sleep for the weekend.  Craig has Emerie next to him in our room and I had Harper next to me.  Reagan, on the other hand, slept fine in her crib, amidst all the stuffiness. 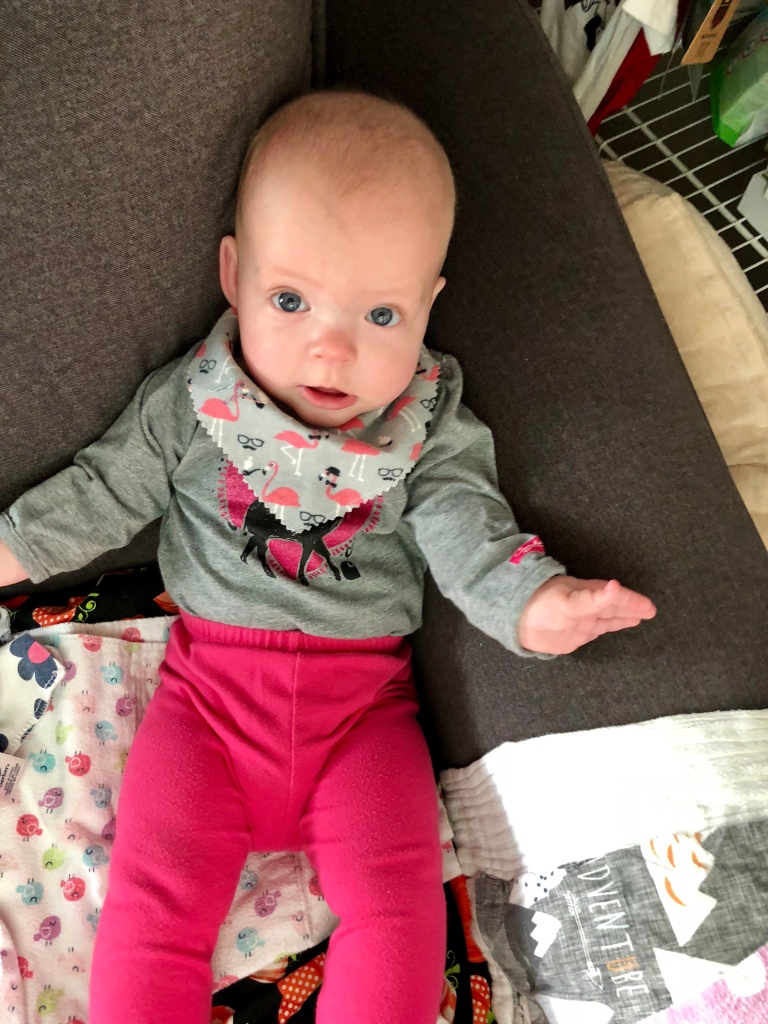 It is funny how the different personalities come out in random things- like the snot sucker. Emerie and Harper don’t seem to mind it (we make sounds and chat with them while we do it), but Reagan just plain cries every time no matter how “fun” we try to make it.  I mean who can really blame her, I don’t like people sucking stuff out of my nose either, but it definitely helps them breathe! 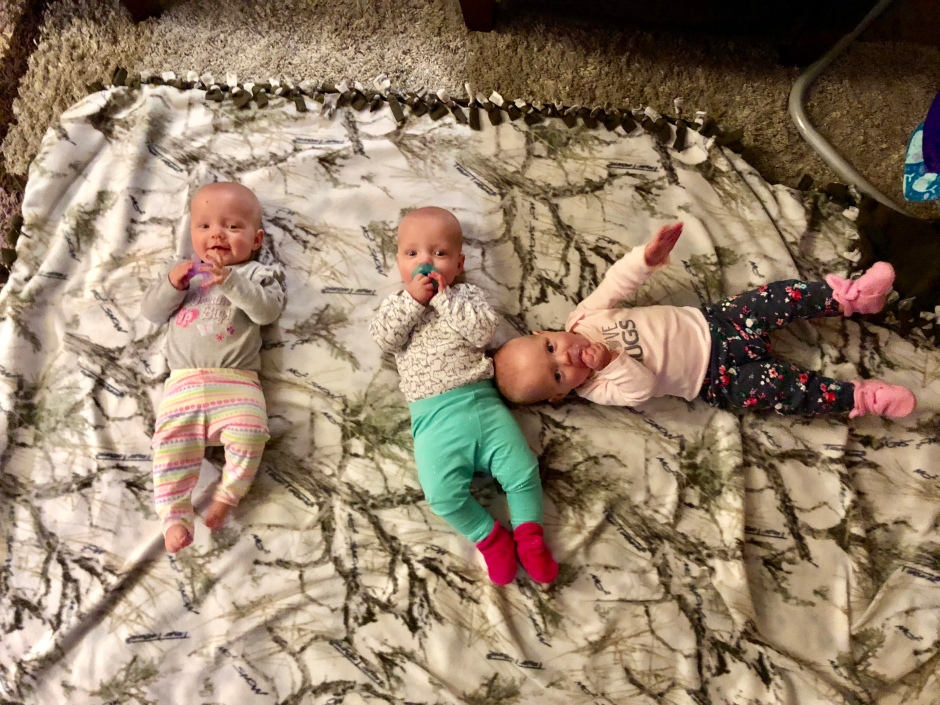 Shifting around on the floor!

We’ve edited the bedtime routine this week to accommodate bathroom sauna time; i.e. running the water on HOT and letting the room steam up right before the nighttime feeding. Everyone gets to hang out in bouncer chairs and mostly enjoys it.  So far it seems to be helping. 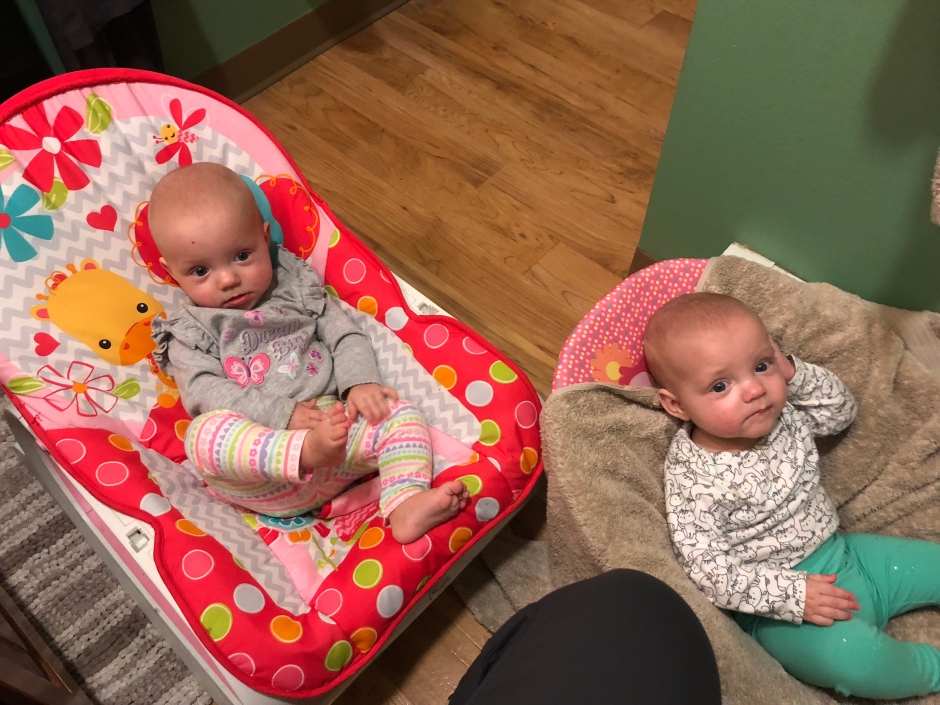 We have a few days left in the current developmental leap. The girls have greatly advanced with their toys and teethers and learned new observation skills. I have seen all three grabbing their pacifiers on the floor next to them, or chewing a teether, setting it down, and picking it back up to chew some more.  The other day Emerie was briefly sitting in the living room recliner chair and I watched her turn her head, scan the end table next to her, grab the TV remote and throw it on the floor.  Much more of that is coming!  Who knew her little arms could reach that already! 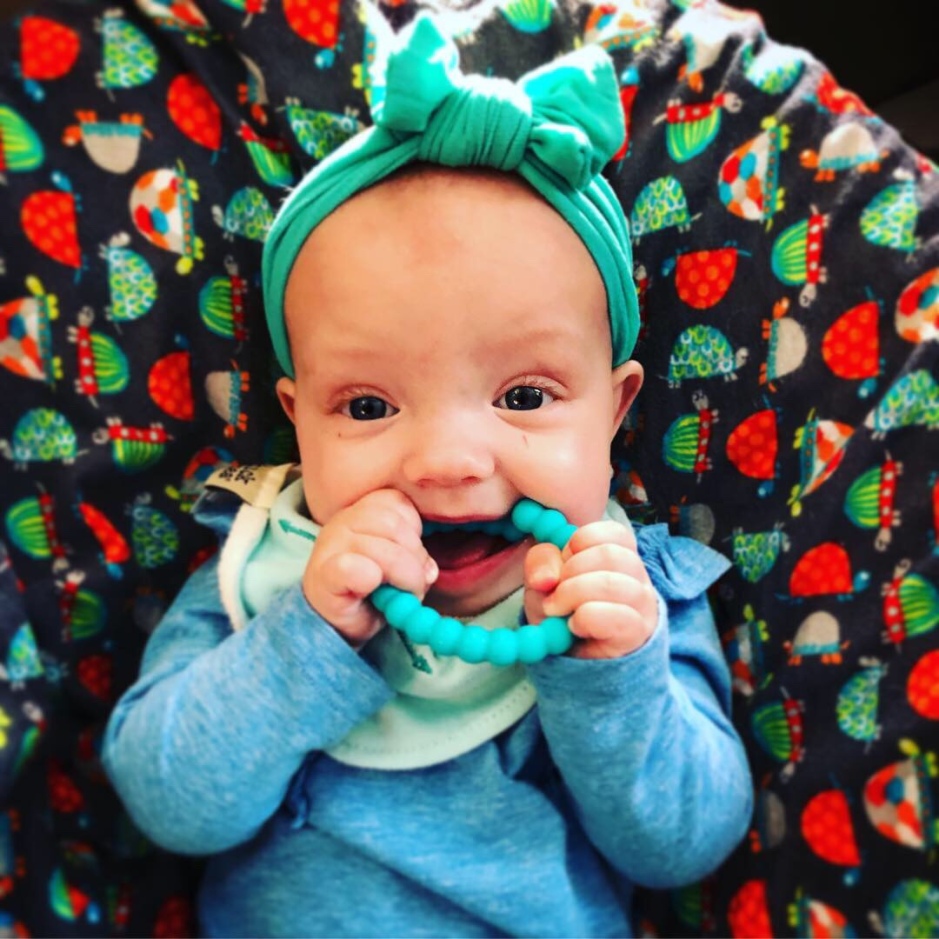 A quick weight update while I’m writing this. At Double Cuddles the girls were weighed:

Tuesday was In & Out Day for me- in other words, the girls cooked for 33 weeks in my belly, and they’ve now been out in the real world for 33 weeks as well. 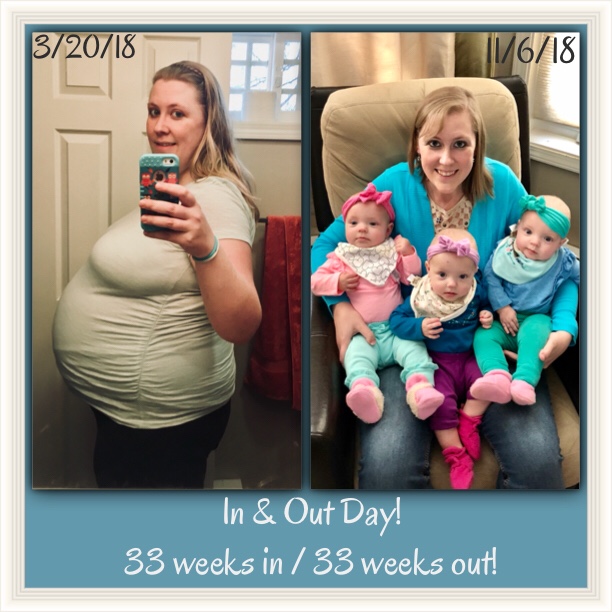 I can’t decide which is actually harder, carrying them and everything that goes with that, OR being so insanely busy each and every moment of the day as they grow and advance out in the world.  I lean toward it being easier post partum, but that is simply because I was so much sicker and immobile while they were growing before their birth! 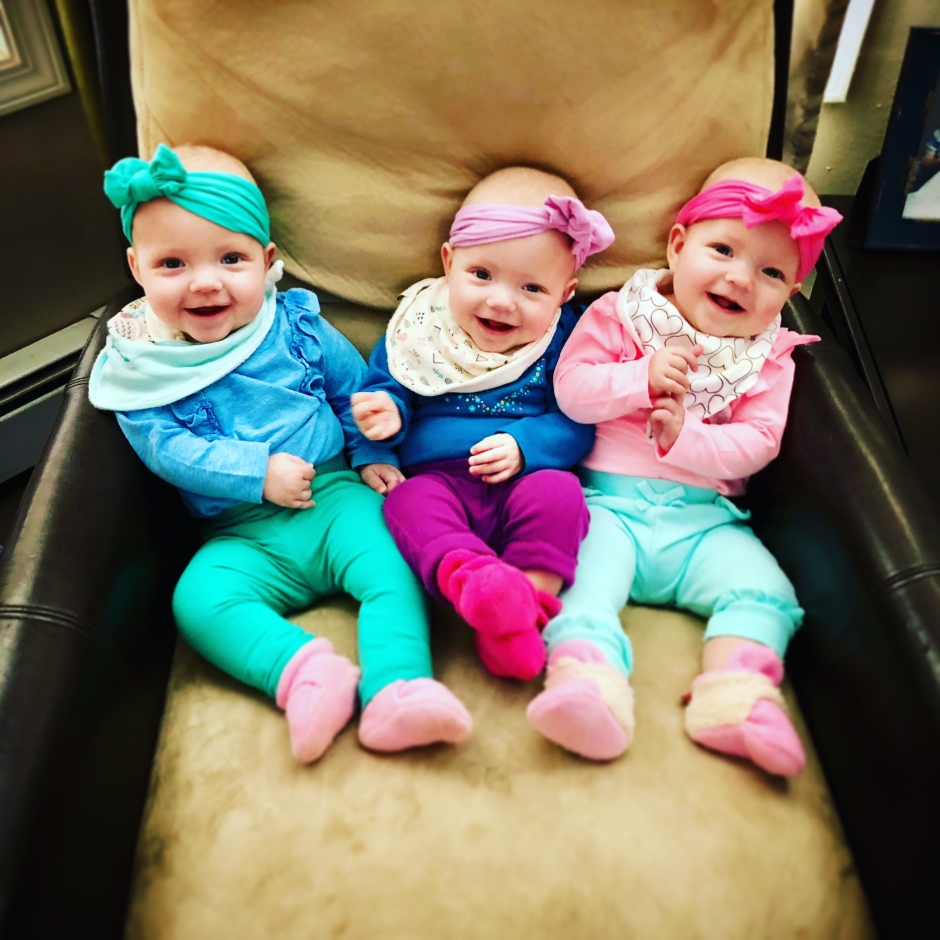 I will leave you with this adorable video. I could watch it all day!