We decided to do an impromptu airplane trip for the whole family, including the girls. As many of you know, Craig’s older brother Chris unexpectedly passed away last week. He is very dear to our hearts and adored by the girls. Bringing them down to Juneau for some family cuddles, playing, and general baby loving will hopefully bring a little cheer to the family during a very tough time.

The trip down was a little more chaotic than I was hoping for, so here are the logistics of traveling with three very mobile, fifteen month olds.

First, it is highly stressful. With it brought a lot of planning and anxiety, but somehow we managed and made it through! 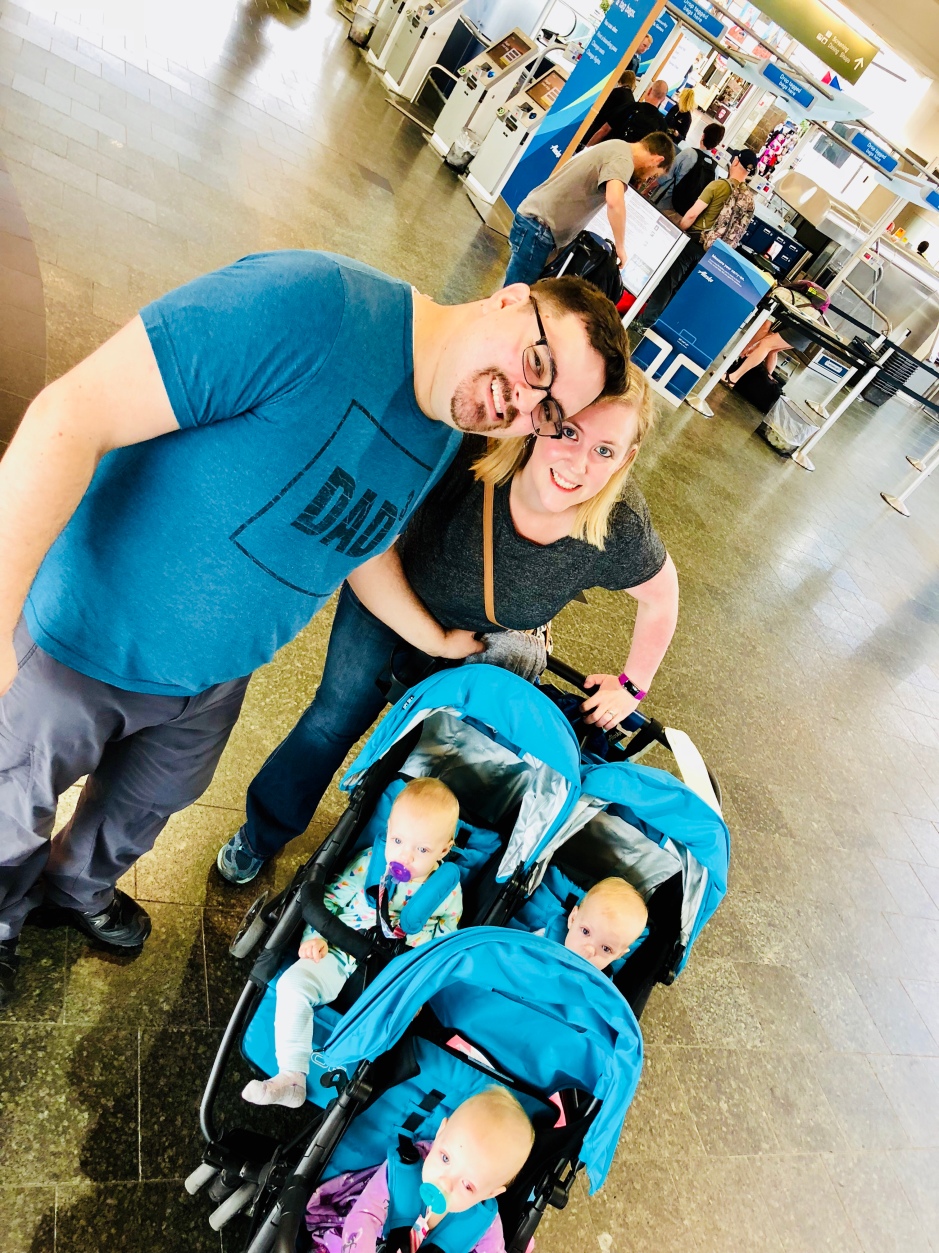 First off, I bought some new toys and made three small play snd snack bags for the plane ride, figuring on the return flight we can simply swap who had what bag. These contain a variety of toddler friendly things: toys, finger snacks, teethers, rattles, etcetera. They worked pretty well for the duration of the flight and we even shared with a fellow toddler in the seat across from Craig, who was less than happy to be confined with her Dad to an airplane seat. 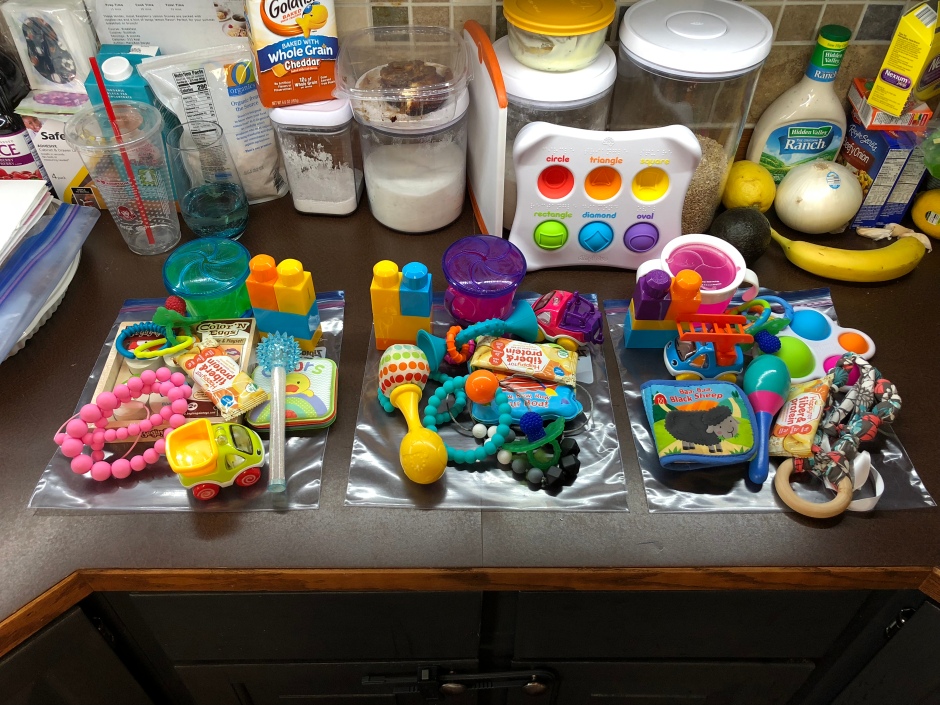 Logistically speaking, we had a one to one ratio of kid versus adult for our hour and a half flight to Juneau, with Grandma Anne providing extra hands on her first trip to Alaskan’s capital city. At the airport we checked three big suitcases and three car seat/bases, carried on a suitcase with supplies in case we needed it, and had the toy and snack bags for each kiddo. We also brought the Zoe triple stroller through the terminal and checked it at the gate right after the last round of diaper changes and splitting up the breastmilk into easily accessible bottles for takeoff.

Don’t get me wrong, I am a big supporter of Alaska Airlines, having flown on it most of my life. I can say for this particular trip, they severely let us down and I was more than disappointed (and stressed). With a reservation error in their system saying Craig and I were children carrying lap children, it took over an hour for the agent to figure out how to process our seats so the boarding passes would even print. After fixing that error, then it said I had no seat at all! Luckily they were able to fix that eventually and the ticketing agent was doing her best to get us on that flight. Needless to say, we almost missed the flight entirely and boy was I fuming for a few minutes! 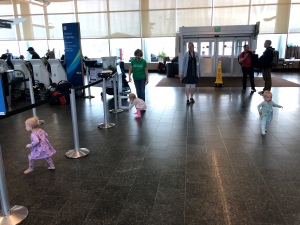 The tiny minions insisted on running around while reservations were fixed

Once reservations were fixed, we headed to the TSA line, knowing this was another necessary hurdle to board. We cut in front of quite a long line of people, and after a couple people the TSA agent let us through for the security check. One lady let us in front of her and her husband, obvious that she’d traveled with kids at some point in her life, and it was very nice of her.

Security took longer than it needed to. We had to unload each baby and carry them through while they wanded the stroller, went through our carry ons, and scanned every bottle of milk and article of snack food ONE BY ONE. I about passed out in a fit of rage at that one…but somehow made it through…

After all of that, and about four hours total getting ready, to the airport, checking in, and passing through security; we made it on the plane about 8 minutes before we backed out of the gate and were the last to board on a nearly full flight. My mom was about eight rows in front of me on the left side aisle while Craig was to my left and up one row with an empty middle seat! They gave me a middle seat (because why not, the day was going so well so far…); fortunately the young man sitting in the aisle voluntarily scooted over. I’m pretty sure I would have bursted into tears right there if he hadn’t done that and he could tell.

The flight was relatively uneventful. Thank goodness it was smooth; my anxiety could not have handled the usual Juneau bumps and I was so glad for minimal wind and mostly clear skies.

Harper fidgeted on my lap the entire flight but didn’t cry with any pressure changes and drank her bottles. She tore up a bunch of napkins and that provided quite the entertainment (sorry cleanup crew). Everything she held ended up on the floor or thrown at the passenger next to me while I attempted to protect his face from the baby snack slingshots. Being in a newer 737 meant she could play with the tray table, phone shelf, and airplane handouts. I finally got smart and clipped a teething necklace to the shelf where she could play but not throw it.

Did I wipe everything down beforehand like I insisted needed to be done? No. I really thought I would care enough to do that when I sat down (because airplane are full of soooo many germs) but to no avail. But we did make it on the plane, all babies and parents. Success.

Reagan made friends with the lady sitting in Craig’s row and I could see Emerie farther up with my mom, sitting with the lady in the window seat, completely happy.

What did I learn from this trip? That showing up early to the airport did not make the trip any smoother, and that we probably need to check in the day before (in person) so the airline can accommodate the three infants at once. I also learned traveling is possible, though not fun, with three mobile toddlers. Not sure if I’m willing to attempt Hawaii until they are a little bigger, but this was certainly educational.

Sitting on that airplane, breathing a sigh of relief that we made it on…in that moment I fully questioned if it was really worth all the effort to come down here. Disrupting our everyday routine, figuring out logistics and trying to keep babies happy, especially only six days post surgery for Emerie. As I sit here writing this, in a quiet house with sleeping babies and husband for hopefully a few more minutes, I can say that it was definitely worth the trouble and I’m glad we came down. Is this week hard and full of tough emotions? Yes, but it’s worth it and our little ones are proving to be very resilient, maybe even more than their parents.

Prayers for the family and that our return trip this weekend is a bit smoother! 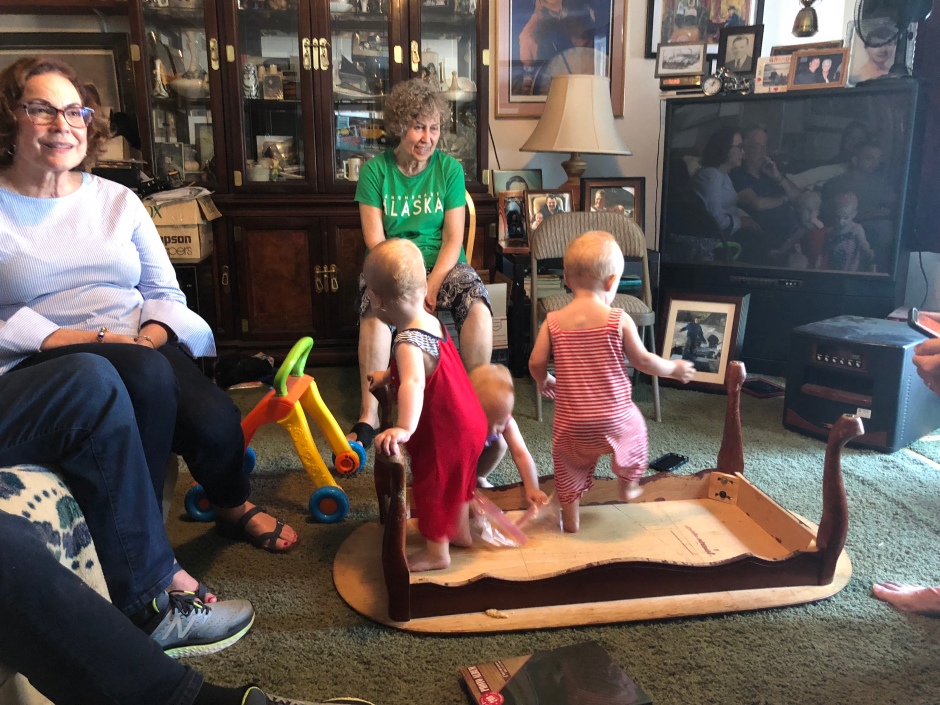