As I start writing this blog, Miss Emerie is in surgery at Alaska Surgery Center with Dr. Winkle, for her left eye lensectomy with placement of intraocular lens.

We were given a pager just like one you receive while waiting for an open dinner table at a restaurant. Sisters are home with the nanny and Grandma.

We had to be at the center by 6 AM and followed instructions of no food or water after midnight, but a bottle of breast milk was allowable before 3:30 AM (four hours prior to surgery). I think it’s really cool that breastmilk doesn’t count as a liquid the same as water does. Typically kids are a little less accommodating when they are hungry; they don’t really care if they are having surgery.

Emerie was a pro this morning and drank a bottle with Craig at about 3:15. Harper and Reagan slept through the whole night without a peep, getting a quick bottle right before we headed out. We loaded up about 5:50 with a wide awake but happy Emerie. 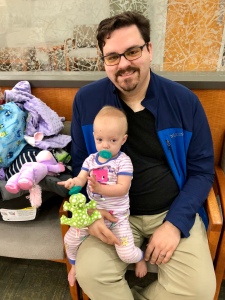 After checking in and finishing all the paperwork, Emerie was given Versed to make her calm and drowsy. It worked like a charm! She snuggled and played with her wubbanub and stuffed unicorn. We also broke out her purple moose blanket! She giggled a bit in her “high”, but overall was semi blob like, very different than our normal Emerie! 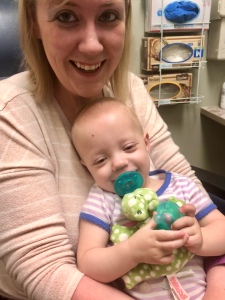 In true triplet style, Dr. Winkle used a purple pen to mark the correct eye! I don’t know if that was intentional or random, but he does have the girls’ colors on their charts. 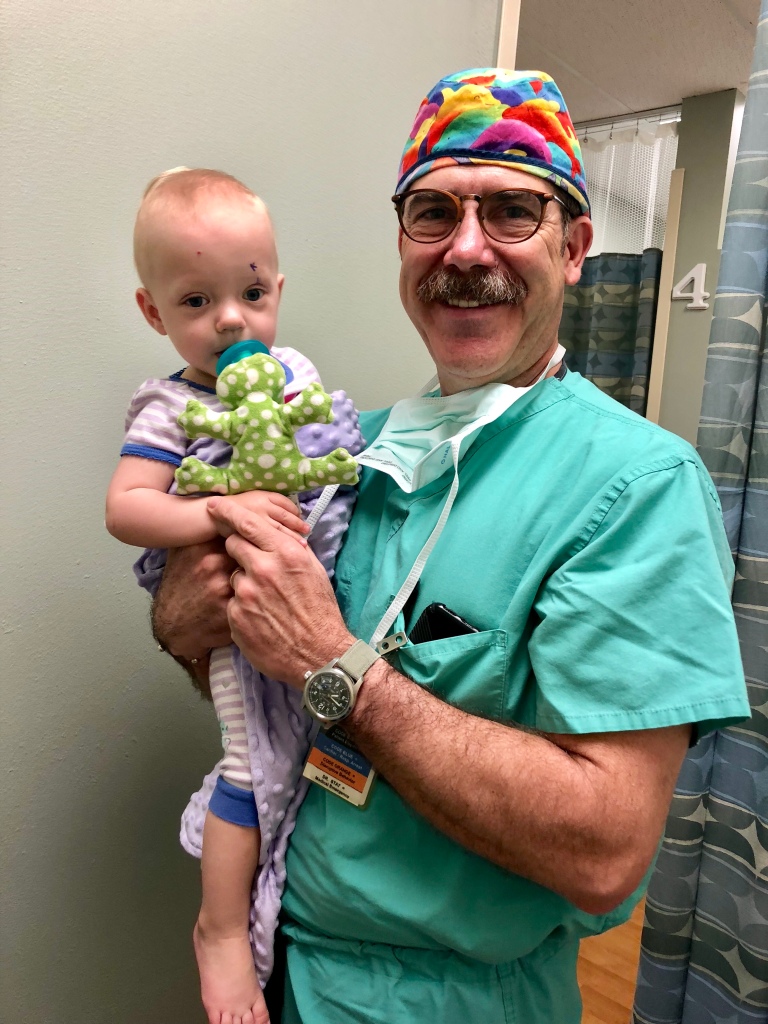 Total surgery time lasted about 90 minutes. Dr. Winkle came out and told us she did great and everything in her eye was exactly what he had anticipated. He also said this issue was present at birth but the leak that caused the cataract blurriness just occurred later.

It took another almost forty minutes before we went back to post op, which started making me nervous! Of course, the nurse said Emerie was raising hell about the protective eye patch and absolutely refused to leave it on. Sounds about right. We have to continually patch for about a week to protect the eye and incision from infection. Luckily the doctor did the stitches inside the eyelid, which is standard in little kids that want to scratch and rub it.

She was very loopy and tugging at her eye when we got back to post op. She was on a ventilator during surgery so her little cry is completely hoarse and so very sad sounding. After some snuggles and major baby rage, we figured being home would help her relax and loaded up.

We made it home and successfully put on one of her daily patches. I am writing this in the dark in the nursery as she fidgety sleeps on me. Hopefully she’ll be feeling a bit better after a nap. It helps that the house is quiet. Harper and Reagan are headed to some playtime with Daddy and Kerstin picked up the dogs out to burn off some energy.

Thank you everyone for the thoughts, prayers and kind words this week and especially today. It’s going to be a long day but will all be worth it when our tiny girl’s vision improves.