Summer solstice means we are hitting the 15 month mark in the Douglet household! It also means the girls’ youngest cousin turned one this week! An update for everyone on the current day-to-day chaos that is triplet toddlers…

Everyone has individual personalities that continue to emerge. I need to look back on an old blog noting who did what the most and see how different six months makes the answers! Everyone also knows their name as well as their sisters’! If you say “hey Reagan”, the other two will look at Reagan. It’s pretty cool.

Miss Emerie is often the instigator on climbing and getting into things and is a fearless daredevil. Eye surgery is scheduled for next week to remove the cataracts from her left eye. We are told she is handling the daily hour of eye-patching like a pro, and we should be very happy with her “good” attitude. And we thought she was grumpy…apparently we are very blessed in that arena and it could be far harder. That’s encouraging! She still goes by Em, Emerie, Emsy, or Peanut, depending on the moment she will even answer to all three, and can say Mom, Momma, Dad, Daddy, and Baby.

Emerie likes both mom and dad right now, but not Uncle William. She gives him funny looks and will not take a bottle from him. If he throws her in the air, well that’s another story. Then she seems to be okay with him

Miss Harper is still the hardest one to get to giggle, but will definitely chuckle if you tickle her tummy! She still responds to Harper and Hay Hay and has such a big smile. She is our only eater that enjoys meat (for the most part) and is highly skilled at getting through the dog door and across the back deck as an adult frantically tries to reach her sneaky butt. She’s done this several times and now we block the door.

Right now she is a momma’s girl, and comes to me most of the time. She has a new game that if you call her over, she will come part way, giggle, turn around and run the other way. She’ll do this several times in a row, especially when she needs a diaper or clothing change and sometimes for snacks.

Miss Reagan, also known as Ray Ray, is still our smiler and giggler. You can find her hanging out in the family room playhouse giggling with either of her sisters or dancing to any type of music. She’s a great dancer! She is also winning the hair contest at the moment, and has one tiny curl behind her right ear.

Reagan is a daddy’s girl right now and is all about Craig. For a while every time he walked into the room she would squeal in excitement. She doesn’t have stranger danger yet but will pick Craig over anyone else every time! She’s also a bit shyer when it comes to adventurous things, like a slide or riding backwards in the wagon. Like me, she has to ease into the new activity and then she is good to go!

Food: The girls typically eat less when they are cold-ridden. This holds true for the past two weeks, but also shows us what foods they really like and will eat when stuffy. Now that we are back to healthy and happy, current favorites include bananas, fresh avocado (ate a whole one at dinner the other night) and blueberries, green beans (straight from the can!), breakfast sausage, and udon noodles. Favorite snack foods are veggie straws, cheese puffs, and stringed cheese. One of the girls is sitting in another highchair at some meals, as opposed to the triple table, because they tug on each other and irritate one another to the point they don’t eat as well.

Sippy cups are not the girls favorite, but we are starting to learn them. For now everyone is still drinking quite a lot at bedtime and a dream bottle at six am so they will sleep until about 8:30 AM, give or take. By 18 months our goal is full use of sippy cups and whole milk, so I can get some time (and SLEEP) back from pumping!

House Stations: Having a living room and family room play area greatly helps the girls stay busy and happy(ier) while at home. We are planning on redoing the living room setup in the next week or so- I am comfortable letting everyone roam the main floor, even when I’m solo, as long as the stairs and dog door are blocked. The girls love running around in the living room, outside of the baby prison, and looking out the windows, playing with shoes or cooking utensils, or chasing around the animals. They all seem to enjoy window licking also… 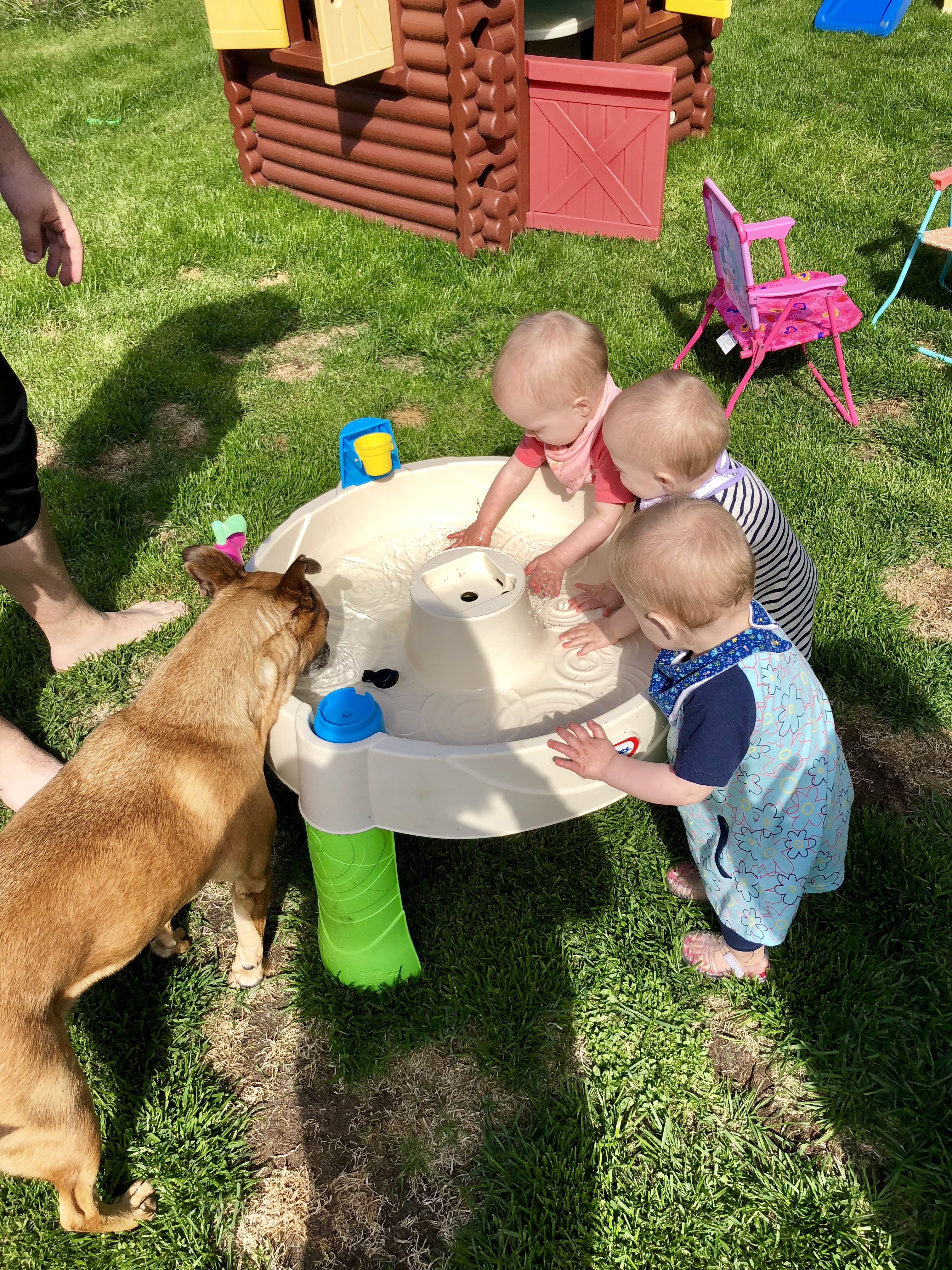 The next step is to convert the dining room to be more kid friendly and give us more space. A third “station”, the new, rebuilt back deck, is also quite the hit and allowing us to enjoy some of the beautiful Alaska sun! The baby lawn chairs are out and the walkers are used to climb on and run back and forth with. We still need a better gate to block the deck stairs, and will get that project started soon when Grandpa Cliff visits next week.

Sleep: Bedtime routine is still going fine. For the most part, other than a few outlier nights, everyone goes to sleep in about 10 minutes once they are down at 8:00 PM. By about midnight we almost always have someone with us for a couple hours; although putting them back in their cribs has gotten a bit easier and they don’t have to be fully asleep for us to set them back down. The consistent thing remains it’s nearly always a different baby. One night Harper will be the grumpy one, and the next night it will be Emerie, or Reagan, and then switch! They are consistently inconsistent about it. And I also find the better sleep we get, the crankier the day seems to be. Try to figure that one out…

Playtime: Playtime continues to become more rambunctious as the days pass. We now have three “pint sized explorers” that want to check out anything and everything around them. 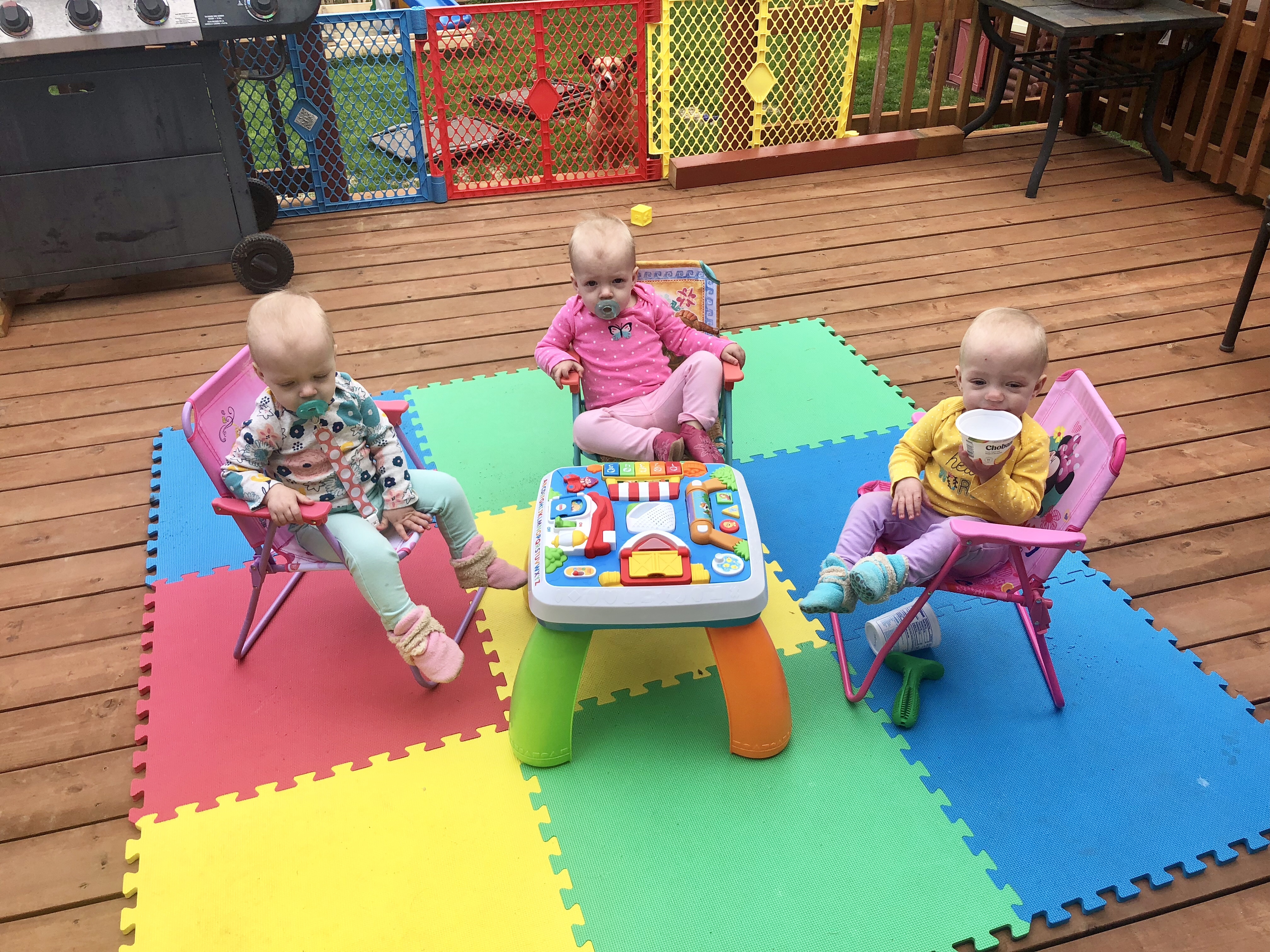 This week the girls discovered how to climb onto the couches downstairs, with Emerie leading the charge and making it all the way onto the window sill after a few tries. They are so very proud when they walk across the cushions, clearly showing they have no fear and don’t realize they can fall off. We enjoyed a solid two months of brief relaxation at night where the girls would play on the floor in the family room and we could attempt to watch an episode of television (slowly marathoning Parks and Rec and some of The Office) while sitting on the couch. Those days are gone. Now the girls all want to climb up and explore their newfound skills.

Everyone LOVES peek-a-boo and patty cake. We are working on a few new songs now too like “head, shoulders, knees, and toes.” The girls instigate peek-a-boo to us and each other, often using a blanket or random pair of pants or shirt that is on the floor. This creates a lot of giggles from everyone.

I am anxiously awaiting the “triplet talk” to begin. Everyone interacts a lot more since their birthday, but we don’t yet hear the baby chatter. There is a lot of giggling between them, but no gibberish yet. Here’s a video from last night with quite the commotion in the kitchen. Silly babies.

Dancing: Everyone enjoys a little hip and butt shaking now. While almost all music triggers at least one kiddo to dance at a time, other specific songs have great affect on everyone. Current favorites include Taylor Swift’s Shake It Off, Patty Cake, a few Ariana Grande songs Craig keeps playing, and of course some Baby Shark melodies.

Much more to come as the mobility continues. I can say month 12-13 we probably the easier months for far in this triplet journey and we are edging back into a bit harder. Why? Those two months everyone started walking, but not climbing. So they were mobile enough to move decently and play and learn new things, but not so good at it that they could climb on the couch or take off full sprint in three different directions like they do now!

One thought on “15 Month Shenanigans”