Welp, I made it through week three of my return to work. I can say that sitting at a desk during the day is much more relaxing that I ever used to think it was, even with the wild chaos that is grant season and end of federal fiscal year.

While I haven’t caught up on work yet since being out, I’m quite enjoying being so busy. The day passes very quickly and before I know it, I’m back at home feeding and playing with babies. 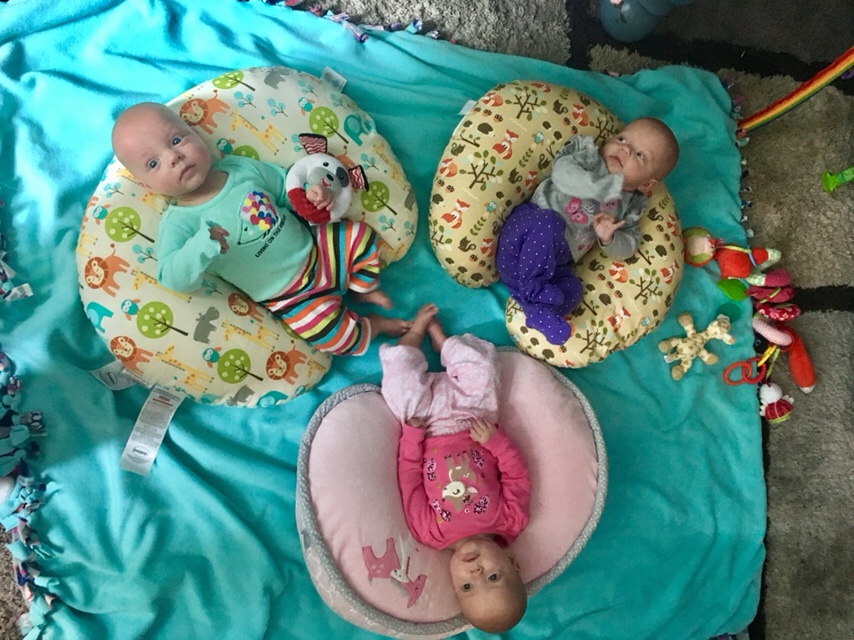 We started nap training this past week and I seriously can’t figure out how I survived the entire summer being home alone during the day without it. In fact, I’m still waiting for that third arm to grow in. After about two hours being up, getting fed and playtime, we swaddle them and put them in their cribs with soft lullabies on the white noise machine. The first few times I said I’d give them 10 minutes to fuss before we got them back up, and so far they’ve never even made it to 5 before they fall asleep. So far so good! It definitely makes them happier in the evening and less super baby rage, and is now their new routine. 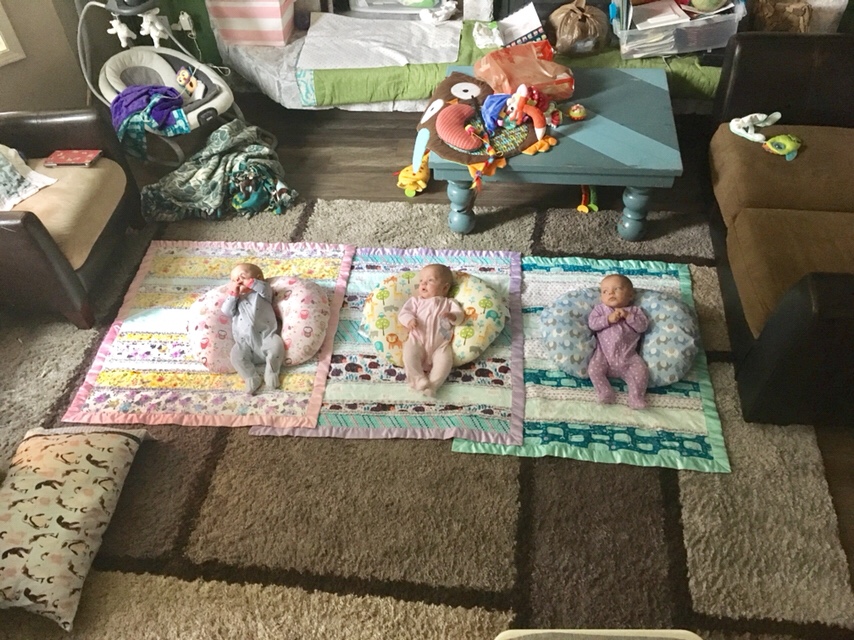 Chillin in the living room

It is also cute to see them figuring out their hands exist. Harper has it figured out and can grab things you dangle over her and put them in her mouth. 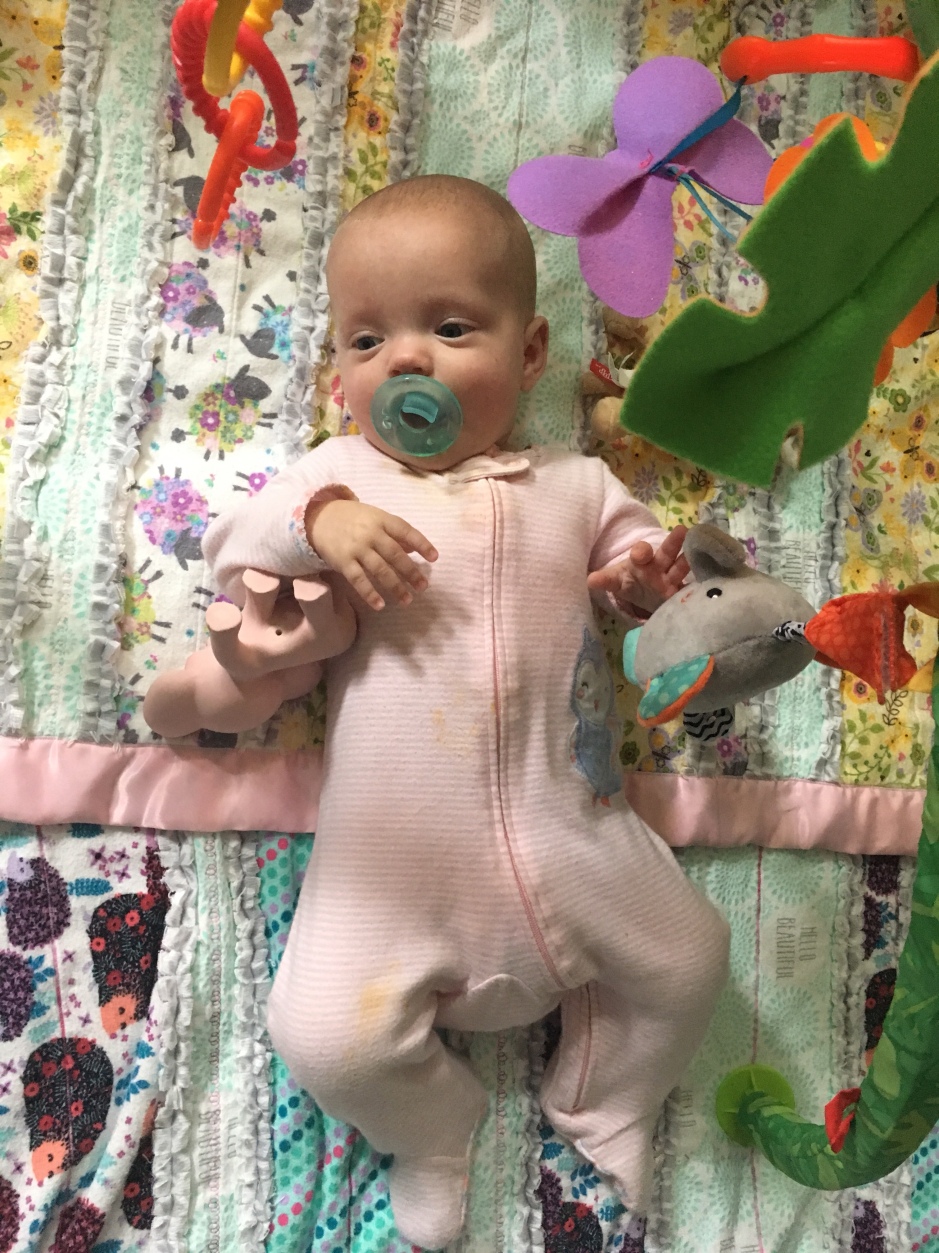 Reagan is starting to realize they are there and reaching for things, and Emerie has figured out she can hold things in her mouth when she wants to, although not quite that her hands are in her control. 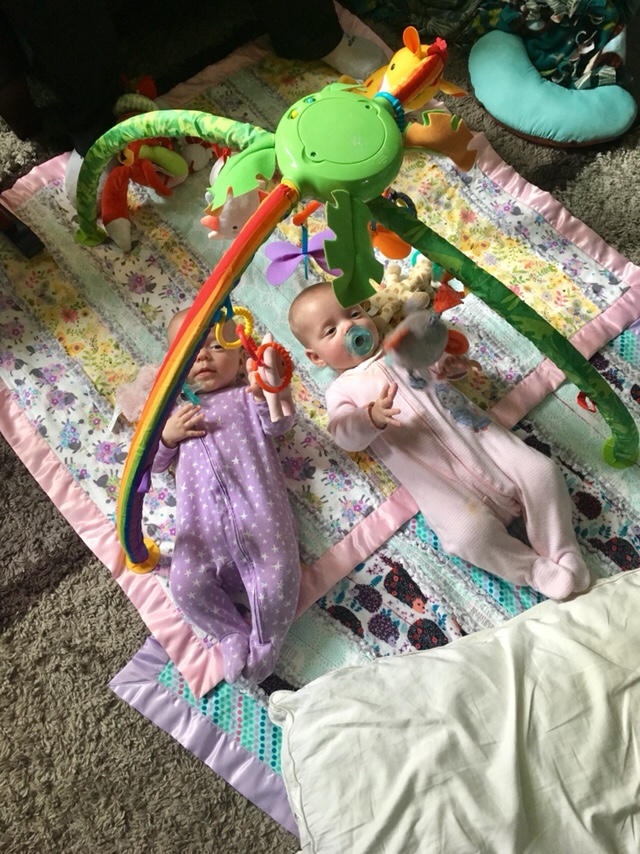 The girls like music and enjoy listening to the old Disney songs we listened to as kids. They really like the Little Mermaid songs. When stalling until bedtime (without a walk during rainy/windy days), we turn on music in the background and entertain them with toys. 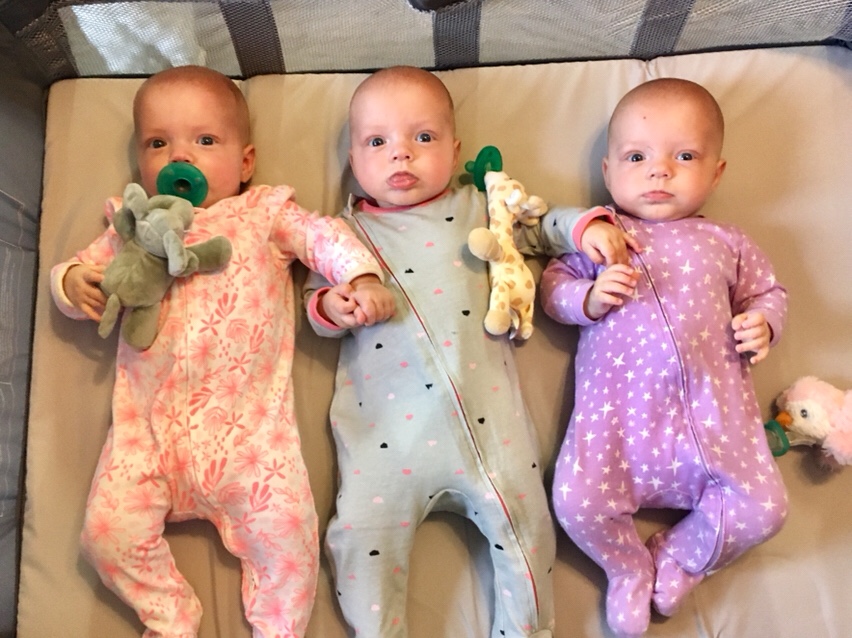 Check out that hand holding!

Something else funny to note. On our late afternoon walk last Friday, we had three separate occasions of someone stopping us to question about the triplets. Normally we don’t have any! One lady questioned “twins?!” with a big smile on her face, to which Craig answered “triplets!” She asked where the third one was (being carried), and I responded “oh we left that one at home, only two fit in the stroller”. The lady thought it was hilarious that I made a joke. People are funny.

We’ve also tried a little bit of baby food. The girls’ reactions are so funny. Emerie immediately picked up how to eat off a spoon and now licks it and loves it! 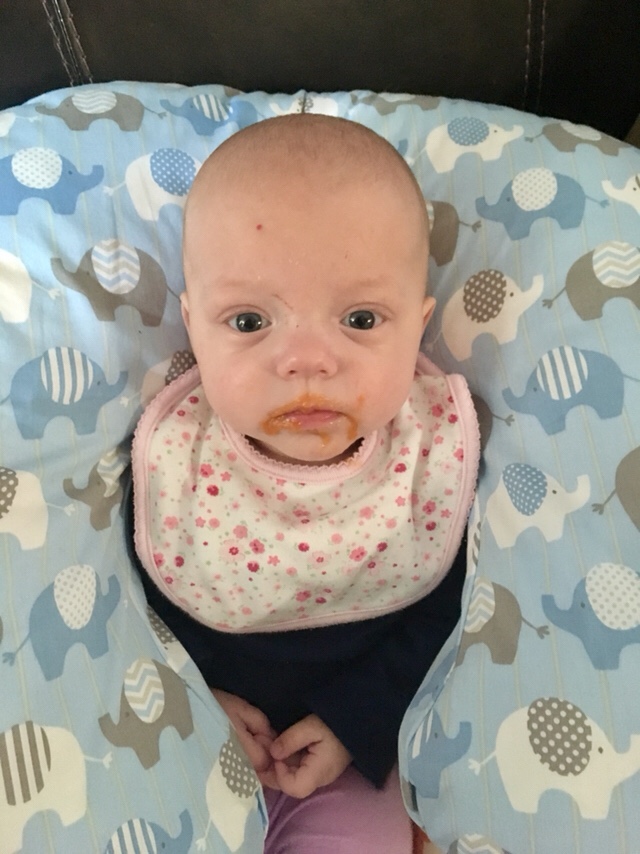 Reagan and Harper more or less think we are poisoning them. 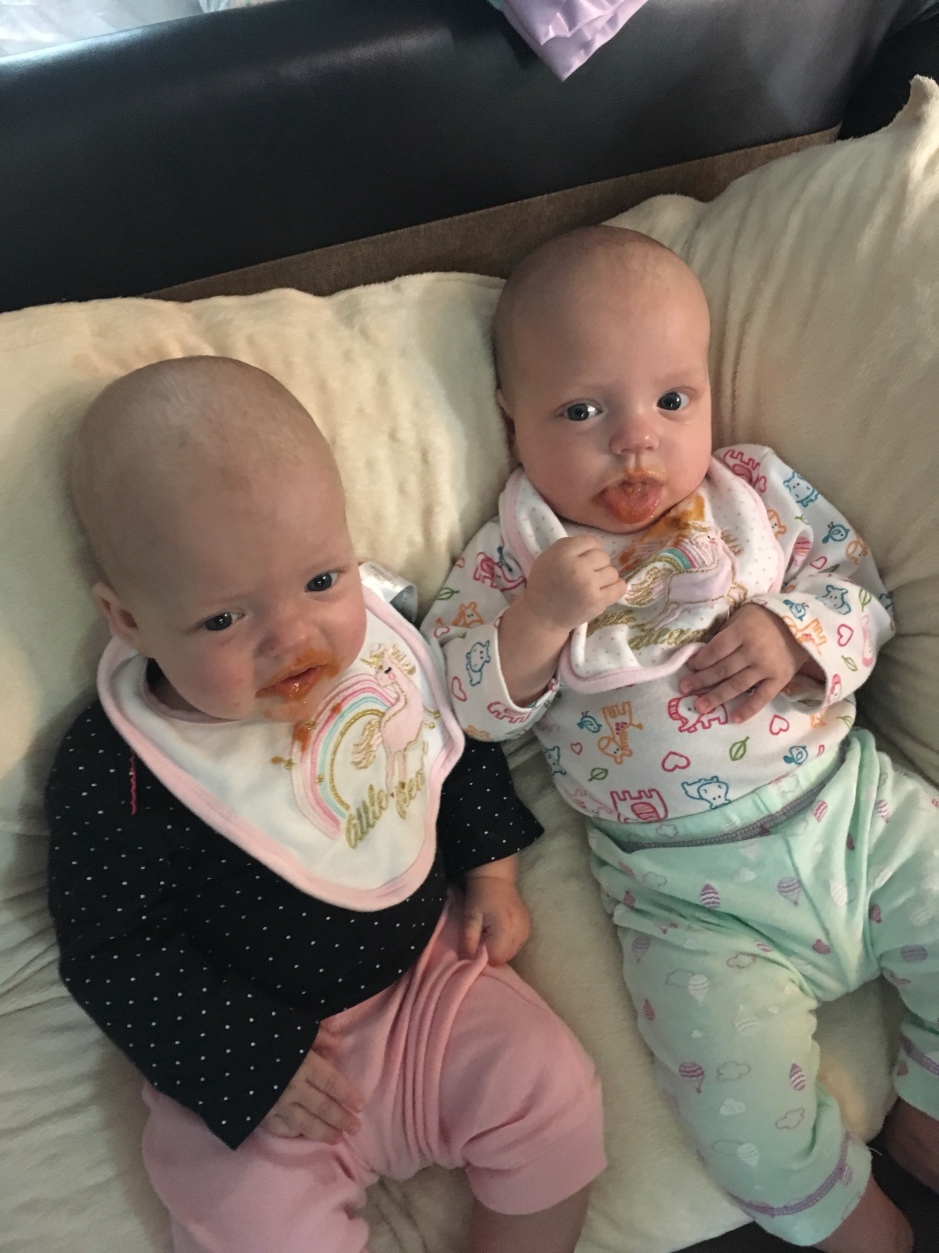 The baby food is fun to try, but of course not supplementing bottles for a couple more months. We’ve tried pears and sweet potatoes so far with a few others ready for next week! 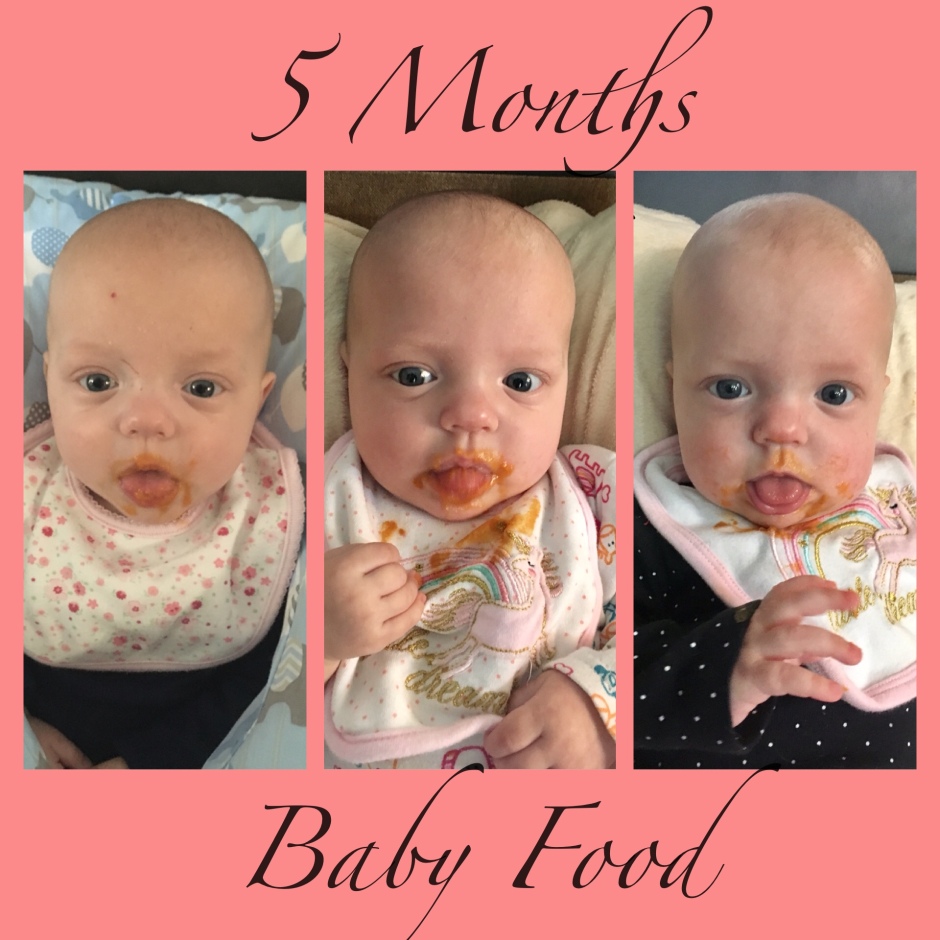 Lastly, Craig and I tested one another tonight to see if we could tell everyone apart. With the girls in diapers and bows (to cover Emerie’s mole), we swapped them around to see if the other person could tell who is who. We both passed! And so did Grandpa Cliff on FaceTime! 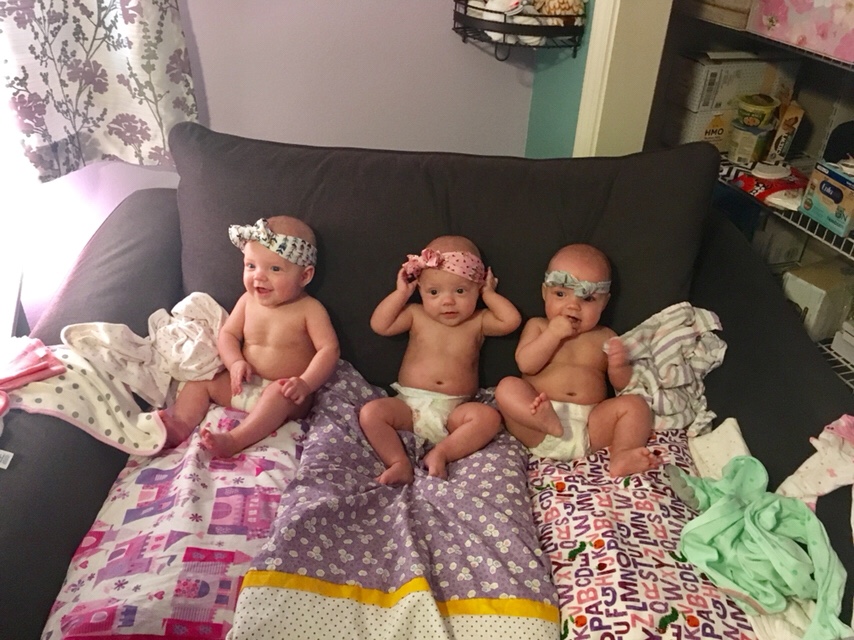