Well it’s true…somehow we are already at five months with the girls. I can hardly believe time has passed so quickly (mostly) and that we are almost to half a year since their birth! 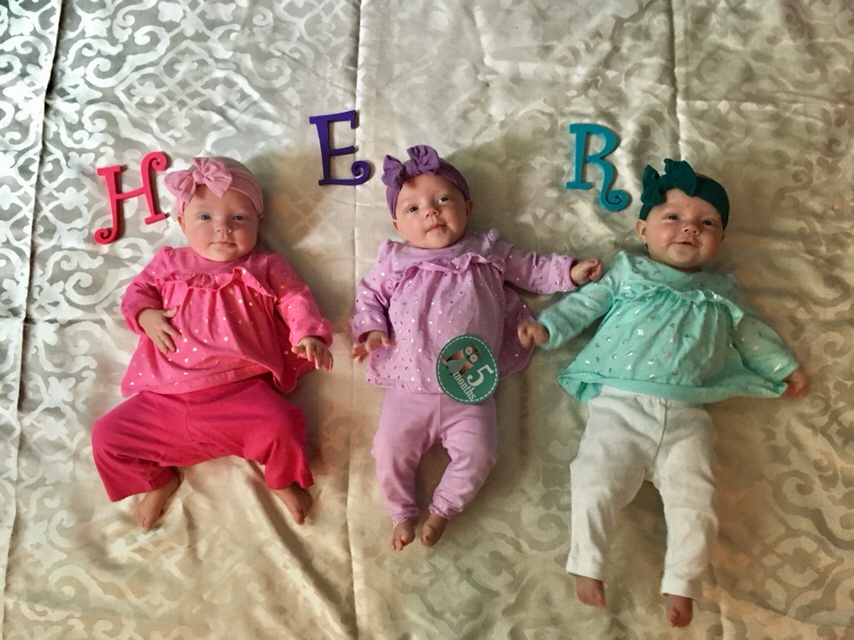 The girls may look the same to the eye, but they are all very different personality wise.  It is fun to see their traits and attributes come out on a day to day basis, and that reminds you they are three, separate individuals; three that just happen to come in the same package. 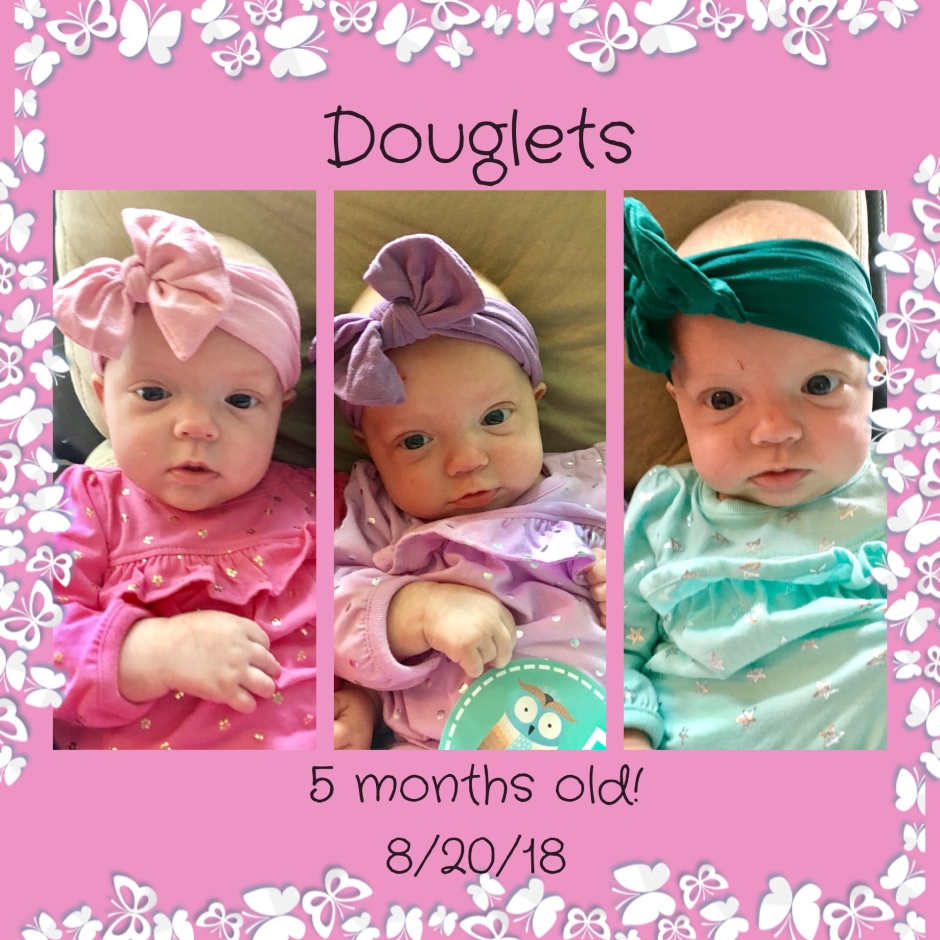 Here are a few things we have noticed for each of them. 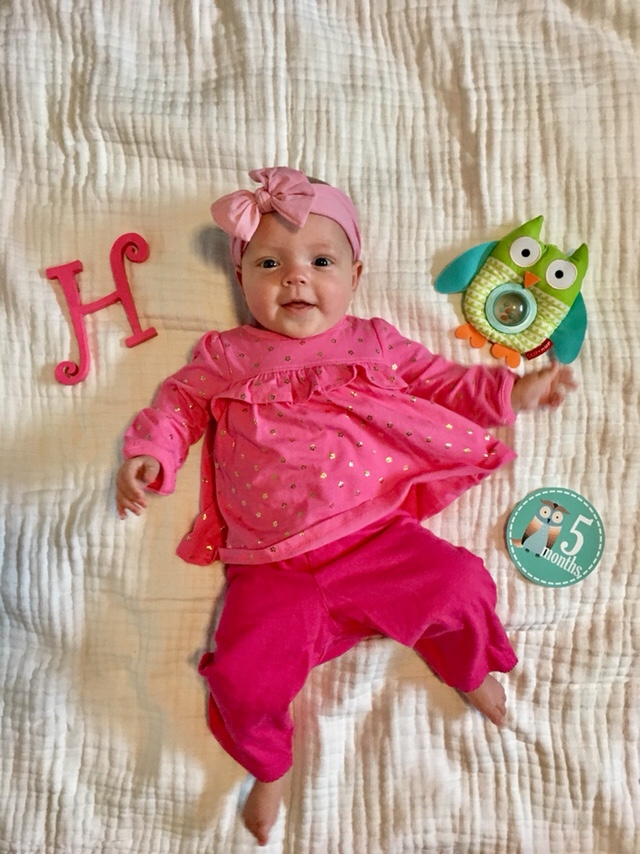 Color: any form of pink

Likes: Harper is a big fan of sleep; in fact, she is by far our best sleeper. In general, she is the first to fall asleep at bedtime and the last to wake up in the morning. She also likes holding onto toys, chewing on them, and telling us all about it.

Development/Traits: She just learned she can lay in her crib and pound her legs on the mattress. She is also very close to understanding that her hands and arms are part of her body and under her control, as she’s been looking at them with new eyes the past week.  I can’t wait until she discovers her feet! Harper is also stubborn and believes rolling is not something she needs to learn or try to learn. Instead, she’d rather spend tummy time crying or scooting forward on her stomach. She is also starting to scoot on her back and can move surprisingly quick when she wants to! Either way, she has no interest in trying to roll over.  Harper also plays this game with herself, on whether or not she can actually fit her entire hand in her mouth.  It’s pretty cute. 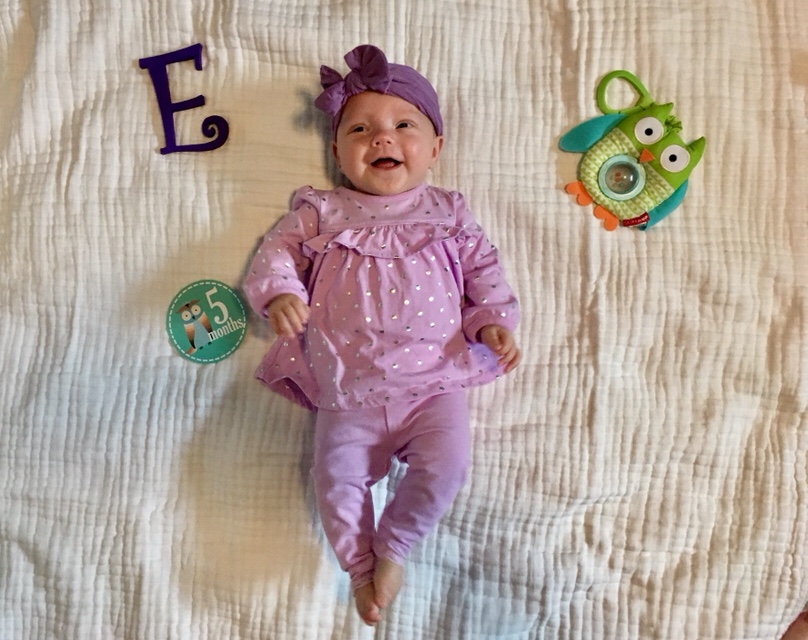 Likes: Emerie is still our snuggler, she likes to be cuddled and doesn’t mind being squished between her sisters.  She also likes her penguin pacifier, and being carried in the carrier on walks.

Dislikes: Being by herself, or being set down when there are able bodies nearby to hold her. Level of arms escaping her sleep sack: expert. She doesn’t like her hands being held down.

Development/Traits: Because Emerie is our littlest, she seems to be a few days behind her sisters on developmental milestones.  The past week she has been on wonderful behavior and likely about to start the next leap.  She rolled over last week for the first time, from stomach to back, but in general is not a fan of tummy time.

She’s also figured out giggling and doesn’t hiccup quite as much after now. She has also become quite the talker, i.e. there is a lot of shrieking everyday. She thinks it’s very fun to be loud. 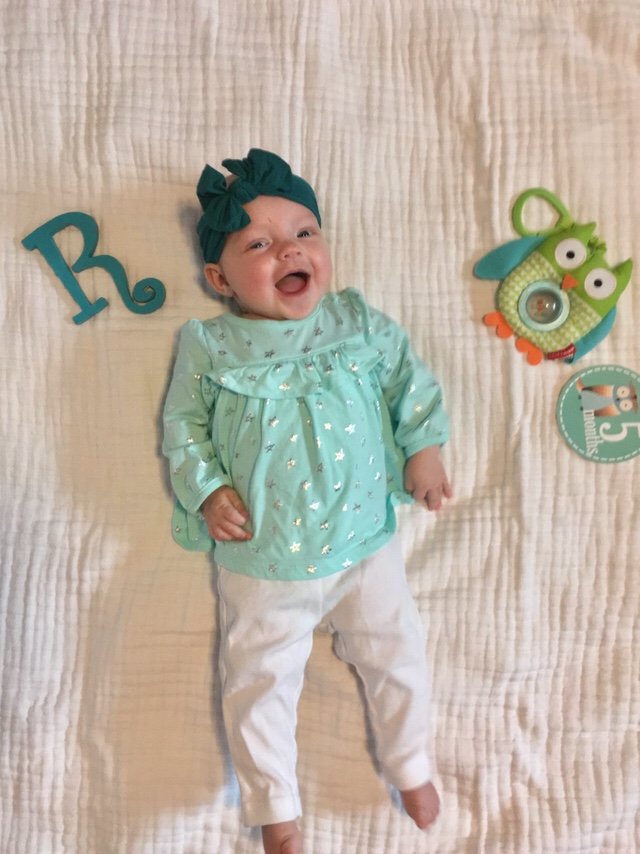 Likes: Reagan really likes her toys, especially the fox spiral one- she chews on the crinkly tail! She also loves one of the owl clips that has beads in it.  Personality wise she loves to smile for pictures and laugh, and enjoys bath time.

Dislikes: She doesn’t like to be squished between her sisters and likes her own space. She is not a fan of sleeping in and is usual the first one up for the day and often the last to fall asleep.

Development/Traits: Reagan is definitely ticklish.  We get more laughs out of her when she’s getting dressed or changed than any other time.  She was the first one to roll over a few months back, and now has done it a number of times. When she doesn’t want to go to bed at night, she tries to roll over in her crib; although I’ve only caught her one time on her stomach. I have a feeling she will be our first crawler, as she is starting to seem like she wants to move more.  She has also figured out how to hold toys in her mouth so she can chew on them.

While the past five months have been very busy with infrequent times to relax and adjust to a new lifestyle, we are feeling pretty good.  Now that both of us are back to working full time, daily schedules are very important to keep everything with the girls running smoothly. While the day starts at 4:30 AM for me and 5:30 AM for Craig, I don’t find myself as tired as I thought I’d be, but it is probably because we are almost always moving and doing several tasks at the same time. Once the girls are down for the night, we tiptoe around the house like the world might end if we make noise.

We go on a lot of evening walks before bedtime, both because now the girls seem more interested in looking around outside, and because it’s nice to get out of the house for half an hour while babies are entertained. They still very much dislike tummy time, but are all getting much stronger- we can’t wait to use the hiking backpacks!

About a month ago we pulled the girls completely off formula and that seems to lessen their crankiness after a feed.  For the moment I am producing about even with them, but as soon as the next growth spurt starts, I think they will be ahead of me.  Luckily solids are right around the corner, and soon they will get to test baby food.

We appreciate everyone’s love and support for the girls and our family, and are excited to see what the next month brings! 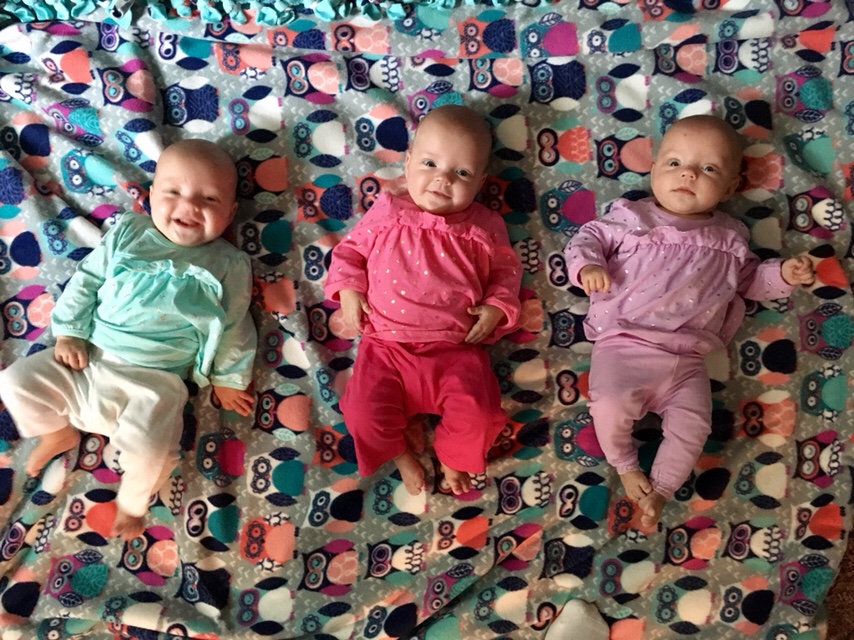