I cannot believe we successfully made it a full year as parents to THREE little girls. Some days my mind still doesn’t grasp the fact I am a parent, and especially to three; hell, other days I still can’t believe I am even an adult. It’s very surreal and such a blessing.

The past year is full of firsts. First time parents. First time seeing dawn EVERY day for the entire summer. First time attached to a breast pump. First time enjoying baby snuggles with MY kids. First Christmas with the girls. First teeth. First projectile vomit (haha). So many firsts, some fun, some a little less fun!

Looking at how tiny and fragile they once were throughout the NICU days, it is amazing to see how far they have flourished into happy, bright eyed, smiley toddlers! And we are a week from completing the next developmental leap.

What has been our favorite part this past year? Craig and I agree on this for the most part. His response was watching the girls grow and change into their own, individual personalities.  He also enjoys that having triplets gives us the opportunity to see into other people’s lives in a new way. It lets us get to know those that have similar pregnancy histories as well as many who struggled before getting to where they are today and gives us a glimpse of their journeys.

Personally, I enjoy seeing every milestones. There were often days where the end was invisible, where everybody was grumpy or wanted more attention and the day didn’t seem survivable, but somehow we managed. After those days, a smile or a giggle was enough to reign me back in to enjoying parenthood, and remind me that babies constantly grow and change, meaning the hard times will too.

Our support system post kiddos sure has changed. I love the multiples moms and dads that are so busy themselves, but still willing to chip in and help when you’ve reached wits end. Words of encouragement are so needed after a sleepless night(s) or a week of intense teething. I hope I provide some of that encouragement to them as they have done for me. It is great to remember we are all in this together.

As we approach toddlerhood, I must remember this next phase will be another learning experience, both as a first time parent and a multiple mom and dad.

Craig says the hardest part for him has been the change in lifestyle; not being able to go and do things at the drop of a hat and having to plan everything out. I may be a planner by profession but I am definitely less of one in my personal life, at least when it comes to planning outings and trips. We were much more spontaneous pre-babies, and now have to plan out all outings ahead of time. He is also not a fan of cutting the tiny finger and toenails as well as the wiping the sniffly noses during a cold!

We took the girls in for their year checkup this week. The appointment took a full two hours!  Now that they are mobile, it is much more difficult to corral them in the exam room, especially when there are three of them and two of you. Luckily the pediatrician’s office is helpful, both the nurses and our doctor, and snuggles the third while we each have one after the shots.

This month’s milestone checkup was a little more complicated than prior ones, with the continuation of winter and battling of illnesses. Everyone received their one year appointment shots, including the MMR against measles. I have been anxiously awaiting this specific shot for the past two months, especially with the measles outbreak in Washington. The room was full of some baby rage for a bit. Surprisingly, no one batted an eye at the foot prick to check their hemoglobin levels. On the sickness side, Emerie either has her third ear infection or is still holding onto her second one from earlier this month. Another round of medicine for her! Harper has a croup cough, the doctor noticed it right away. She’s had it for a couple weeks but when we took her in previously, were told it was just a cold cough and it would pass.  Harper also has fluid in an ear that we need to recheck to see if she develops an ear infection like her sister. Reagan, thankfully, just has a runny nose and cold (the other two do too).

Now let’s get to the good stuff, an update on the girls!

No one broke the 20 pound weight, but we were pretty close!  Harper now weighs 19 pounds, 6 ounces, and is currently winning the weight category again for the first time in a few months. Reagan is 19 pounds 5 ounces. Emerie is still our little peanut, coming in smallest at 17 pounds 10 ounces, moving up a bit in her percentile to 17th.

Everyone has grown so much the past year. Here are all 12 month photos.

Everyone is on the move and crawling. Walking is right around the corner and everyone is pulling themselves up as much as possible! They really like standing with the jumpers (while not in them) and playing with the toys on them. The other day I caught Reagan chewing the tv stand knob.

The jumpers are still used, but not nearly as much. Floor playtime is the new jumper! We keep rearranging the house to fit everything now that everyone is mobile. 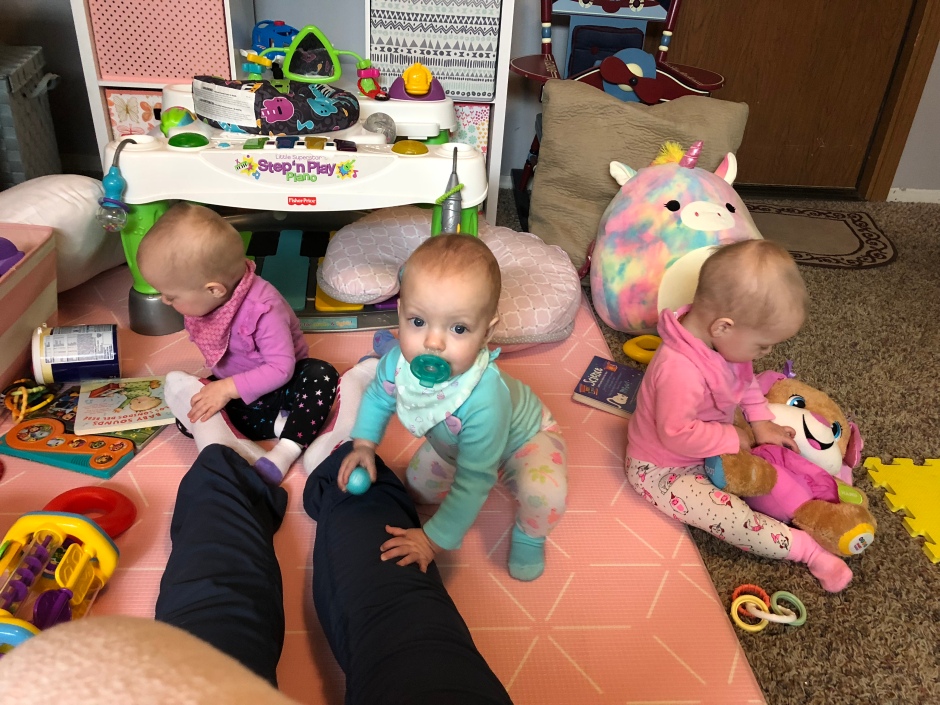 Harper is the first to stand without any assistance. Reagan and Emerie are doing it a little, but she can stand and hold a toy for 30 seconds without plopping down. No one is side stepping too much, but they will hold things, crawl, pull themselves up somewhere else, and so on.

Mango in all forms is the favorite food. They also all love the yogurt melties, all flavors. I wish they made the vanilla banana in adult sized bags… Harper is giving Grandma Sue hell over her food choices and fights eating any real food she makes. Emerie and Reagan like her cooking. We are still introducing lots of foods; so far the girls seem to be a bit picky about textures, but like food in general. We are a little behind in the game and just starting to introduce sippy cups this week. They all seem to understand them pretty well!

Harper feeds the dog the most. Kalli will even take food out of her hand if I’m not paying close enough attention. She has to have small tests bites from the spoon or she will completely refuse anything you feed her. Emerie, on the other hand, will pretty much eat anything unless she’s grumpy. Reagan really likes to shovel everything into her mouth, whereas sometimes Emerie will only try it from the spoon.

Yes, I am still pumping…a lot… I meticulously write everything down (big surprise there). In total, for the first year, I have pumped 22,155 ounces of milk…or 173 GALLONS. That equates to, in average, about half a gallon per day. My goodness, that sounds like a lot as I write this! I was ahead of the girls for a while and pumping six times per day, the past six months or so I am down to five times per day, which feels much more doable. When teething, I am ahead of them. When everyone is happy with no colds, we supplement a feed or so a day with formula.

The teeth are back. The teething is definitely back!! It’s interesting to see that all have teeth coming in on the top left hand side, both front and “i” teeth. 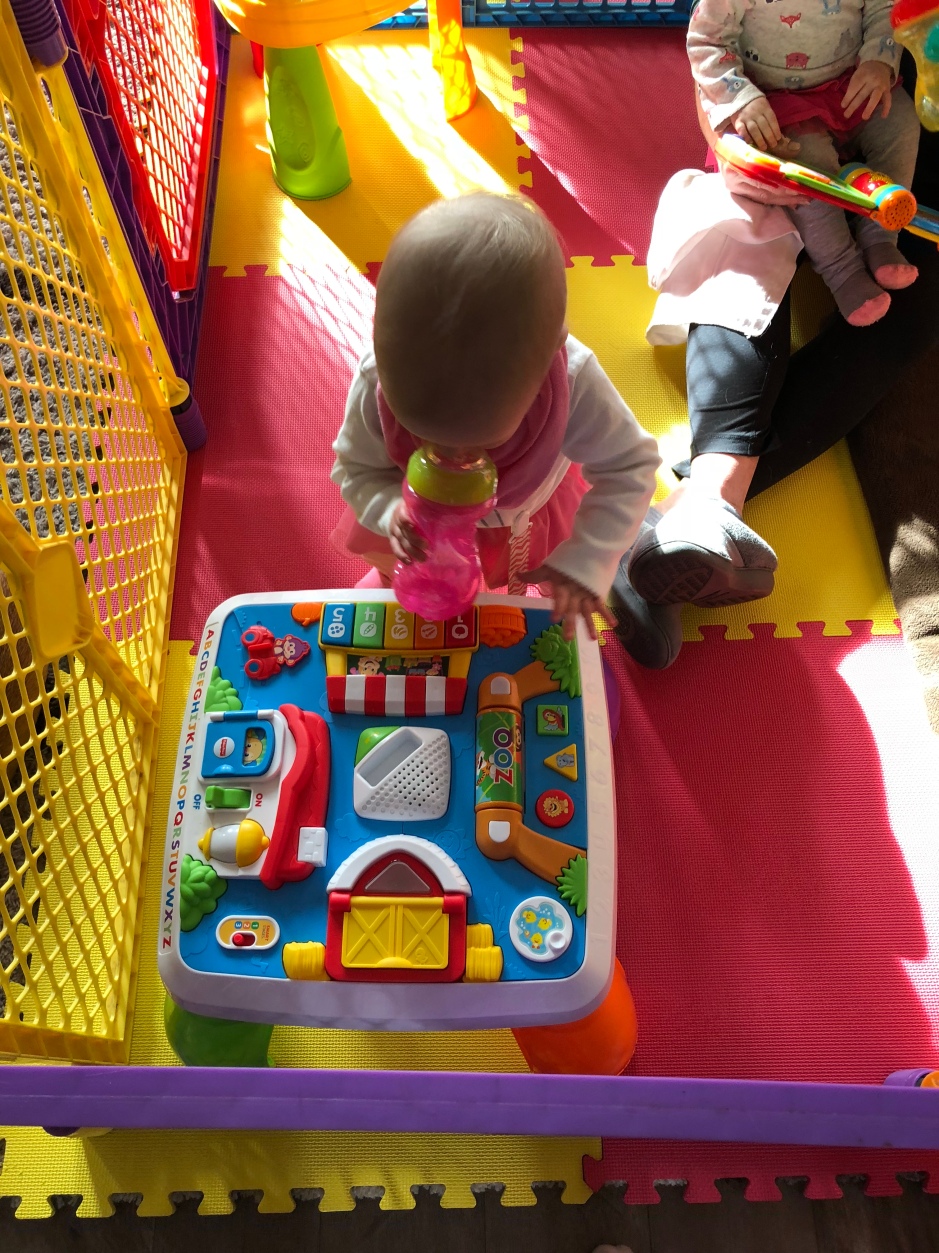 Favorite toys have not changed in the past several months. The singing toucan and the play table are definitely hits still. Grandma Sue just bought the girls little dollies and they think they’re silly and giggle at them. Kalli also tries to eat them…YouTube remains a favorite in the house, with Disney and princesses themed music.

Thank you to everyone who is sharing this journey with us. Here is to year number two!