The past few weeks pushed us out of our normal routine. As the girls continue to grow, each personality shows up a little more and constantly in new ways. 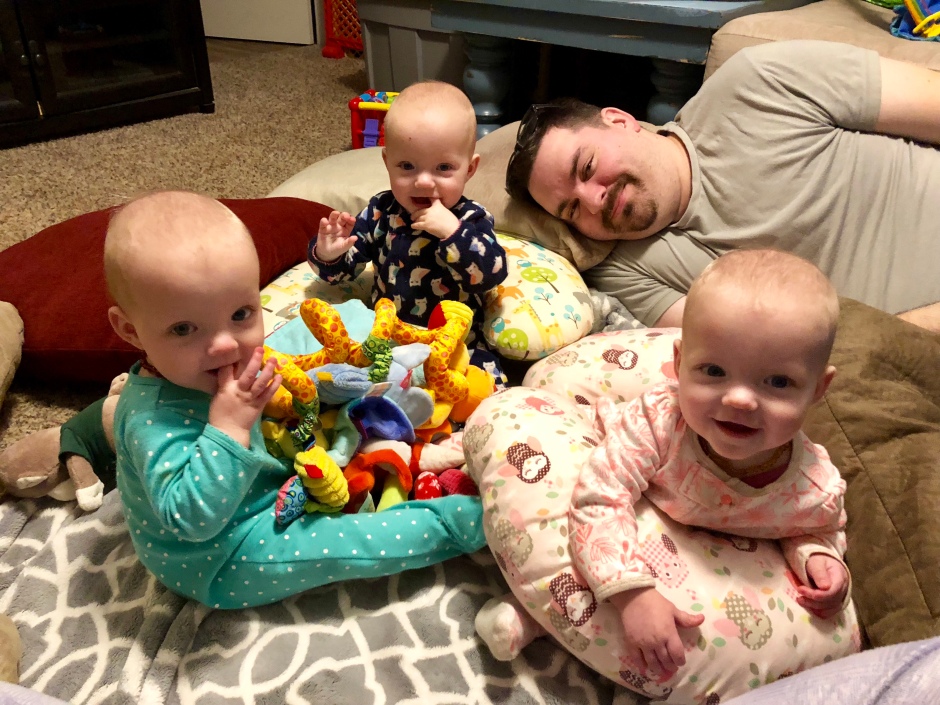 What is notable now is that it seems as though the girls are flipping around on a few of their traits. How?

We used to sleep. A solid, beautiful six or seven hours each night with only a handful of jumps out of bed to calm one or re-binkie. This phase appears to be over, especially for Harper, our best sleeper up until December. Now it is Reagan who is happy in her crib for the night, and generally doesn’t fight us when she goes down to sleep. Her timid demeanor lets her settle down for bed and go to sleep, especially when she has her pacifier.

The girls have always been swaddled for naps and nighttime. While this doesn’t work for all babies, we were 3 for 3 since coming home from the hospital. As the girls continue to grow and find the world more interesting, so far we have been unsuccessful in figuring out how to “unswaddle” them.

That brings us to this week.

Because we had such good sleepers prior to the holiday season, we never saw a reason for the cry it out (CIO) sleep training method…until now. In an attempt to get everyone out of our room and back into their own crib, we decided to give it a shot and hit two birds with one stone, teaching them to settle themselves AND be unswaddled.

The first night of sleep training really displayed how stubborn our little minions are. We started bedtime at six like usual, coaxed about six to eight ounces of breast milk down each kiddo over the course of an hour, following our usual routine. Then, instead of coddling them to relax and crib sleep, we put everyone down, gave them a binkie, turned off the light and walked out of the room.

How’d they like that? Emerie was fully prepared to fight to the death over sleeping in her crib. It’s been quite a while since she’s spent an entire night in it, much to the dismay of Craig’s normal sleep habits. So off she went, like a heat seeking missile of baby rage.

Emerie’s rage encouraged Harper…I mean I guess sisters should battle things together? So both raged. Reagan quietly laid in her bed, wide eyed, chewing on her binkie with wide eyes and probably wondering what in the world was up with her sisters’ rage.

10 minutes. By this time all are crying. You can definitely tell Harper and Emerie are throwing temper tantrums, while Reagan is a little overwhelmed at their shrieks and is crying in response to that.

So the cycle continues. 10 minutes. Go in and reassure and binkie, walk back out. Massive rage. 10 minutes. Check and reassure, them walk back out. Then 15 minutes. Still baby rage. At this point I caved and gave Reagan to my mom, because her crying was due to her sisters chaos, otherwise she would have been sound asleep already. The second 15 minute stint finally accomplished our goal of the girls caving in due to exhaustion, and off to sleep they went (unswaddled!!).

Best night sleep for Craig and I in probably 2 months. I almost don’t even know how to handle a whole night’s sleep.

similar to the first night, the girls quickly hit rage once set down in the cribs. It appears the days are over when they will hang out in their cribs while we get extra milk down one of them, as the screaming starts about the time you lean Harper and Emerie over the crib to set them down. Definitely a new and not so fun trend. The girls drifted off to sleep after the first 15 minute interval (10. 10. 15). It is encouraging it was a little better than the first night.

Victory is not yet declared, but we are making progress. The girls hollered through two ten minutes and one fifteen minute interval, and then Harper finally caved and fell asleep, allowing Reagan to then settle. Emerie fell asleep in the second ten minutes and slept through all other fussing by her sisters. That is definitely a first! They fussed a little through the night but self soothed after a couple minutes!

This night took a ten minute and fifteen minute interval. While you could certainly tell everyone was tired, they definitely fought it tooth and nail to stay awake.

Emerie would NOT feed and was put to bed with only two ounces, far less than her normal, so it was no big surprise when she was hollering at 10:30. I checked on her and then let her cry it out, and after a full hour caved and gave her more of a bottle. Little stinker! We ended up with Harper in our room and me asleep on the nursery armchair with Emerie. So much for that sleep training. I think the girls won this night. Reagan, like a champ, slept through the night in her crib and even soothes herself a couple of times when Emerie squawked from the chair.

Again Miss Emerie wasn’t a fan of dinner time, although we managed to get a bottle down her. Tonight’s cry it out only took about 15 minutes! We did an impromptu bouncer session part of the way through their feeding, which we never do, but they were SO hyper. That seemed to help them go down a bit faster after that, but only worked until Emerie completely lost her mind around midnight. Needless to say, we lost that battle and gave her to Grandma because she kept waking up Harper and Reagan.

Harper and Reagan went down pretty quick after their feed. Craig and my mom fed them their bottles and settled them a bit before putting them in their cribs with binkies. They maybe fussed five minutes? I fed Emerie in a different room- she was clearly grumpy and not feeling great, but I managed to get six ounces down her before she fell asleep.

Unfortunately her quick cat nap made her stay awake until around 10, so she and I slept in the first room for the night. She is also either growing a cold or has a sore throat, because she is hoarse and it sounds so pitiful!

It’s not super fun to let your kiddos scream it out; however, it drastically improves their sleep and helps them learn to self soothe and remain calm (mostly) when another one is crying. While at first I questioned if we should subject Reagan to her sisters crying, ultimately it was better to have everyone go through it together.

In five days we successfully broke them of the swaddle habit we’ve stuck to since bringing them home from the NICU. Now they are napping with arms out in the swaddle blankets or sleeveless swaddlers and will reach around in their cribs looking for their pacifiers without our assistance!

They also look ADORABLE when sleeping with their arms out. I think Harper might end up being a tummy sleeper (as long as she doesn’t realize it is like tummy time haha). Reagan is now our best sleeper and Emerie is still a work in progress but does go to sleep eventually!

How I found Harper this morning, happy with her giraffe wubbanub

We are glad to have the swaddling issue solved. While I would have been okay with them staying swaddled until they are five…I figure that is probably not the best route to get them to sleep anymore (haha).

We are also back to no Grandmas staying in the house, so the girls outnumber us again. Now let’s just get through the rest of their first year without a bunch of sickness and at least one needs to sleep each night!Fingers crossed.